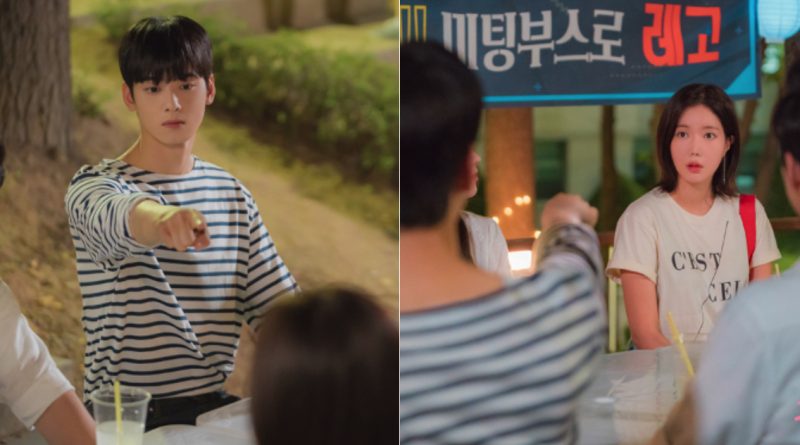 Im Soo Hyang and Cha Eun Woo met in a meeting booth. What could ppossibly happened to the two of them in the campus festival after clearing out their misunderstanding?

JTBC drama ‘My ID is Gangnam Beuaty’ that aired in August 11th has just released the still cuts of Kang Mi Rae (Im Soo Hyang) and Do Kyung Suk (Cha Eun Woo) who met in the meeting booth.

In the past, Kyung Suk was the most popular guy in middle school and Mi Rae was an unconfident girl since she had the ugly appearance. In the latest episode that iared in 10th of August, Mi Rae remembered her memories about Kyung Suk who has hurt her since the middle school but it turned out that it was just her misunderstanding. Unlike what Mi Rae thought that Kyung Suk was laughing at her ugly appearance in the bust stop, Kyung Suk told her, “I’ve never seen someone dance like that before” he told her, clearing the misunderstanding between them.

Mi Rae finally realized that Do Kyung Suk never done anything wrong to her. Kyung Suk remembered her in his memory as that funny friend and now he slightly became her black night when she was confronted with Gang Ok.

Mi Rae and Kyung Suk were seen sitting on the table facing each other. A banner with the words ‘Booth Meeting’ was seen right above Mi Rae’s head. What could be the reason the two of them ended up in the meeting booth and what exactly related between them and their campus festival? Especially since the picture showed Kyung Suk who was pointing at Mi Rae and the surprised expression on Mi Rae’s Face.

July 7, 2018 Ria Comments Off on 4 Places to Visit While In Seoul
Rank&Talk STAR

December 23, 2017 Tirta Comments Off on Korean Artists Who are Not Siblings Despite Having Familiar Faces
Rank&Talk STAR