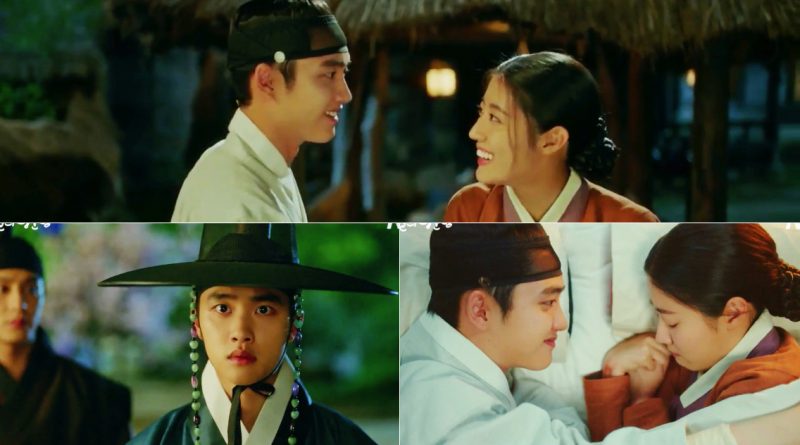 tvN newest drama ‘Hundred Days Husband’ has released its main teaser in August 20th that revealed a story of Won Deuk (Do Kyung Soo) and Hong Shim (Nam Ji Hyun) in the drama. The beautiful music which harmonized the scenes of moment between Won Deuk and Hong Shim made the viewers excited and put a high expectation on this romantic historical drama.

The crown prince Lee Yool (Do Kyung Soo) who saw Hong Shim under the cherry blossom tree was mesmerized by her beauty as the narration started “Do you like snow? Or flowers?” and then the other narrator voice said “I Like you. I will marry you” that gives off a sign of the beginning of his destiny with his future wife, Hong Shim. But then he lost his memories as the crown prince and now become a totally common people.

Won Deuk was seen asking Hong Shim to call him ‘Sir’ in the main teaser that recently just released as he is still looking good and keeping Hong Shim company next to her. He was staring at Hong Shim who was asleep as he smiled. At that moment, Won Deuk’s narration begun by “Till the end of my life, you are my woman, I am your man” he said as he showed his passion and feelings towards her wife that made the viewers couldn’t help but anticipated their love story.

Meanwhile, ‘Hundred Days Husband’ tells a story of a crown prince who suddenly kidnapped and became a common people. With the set in Joseon Dynasty period, tvN has captured the viewers attention through this drama not only for the romantic comedy genre but also the brilliant ideas and combinations of elements.