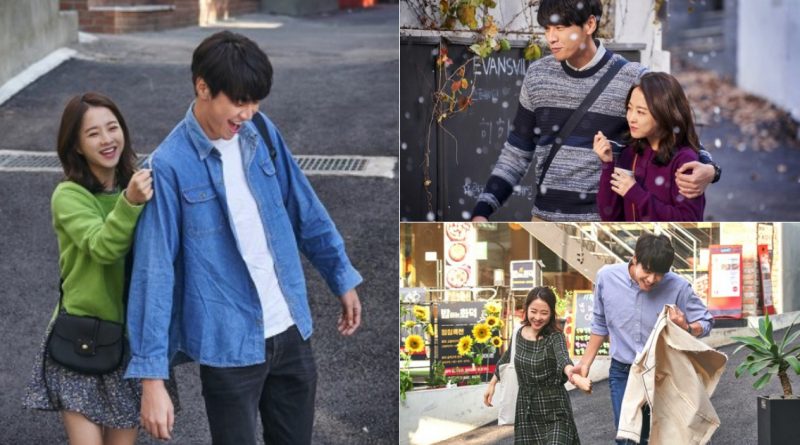 ‘On Your Wedding Day’ tell a story of Seung Hee (Park Bo Young) and Woo Hyun (Kim Young Hwang) who fell in love for first time and believe don the fate of their first love at the first sight. ’On Your Wedding Day’ captured the viewers attention by releasing a still cuts of Seung Hee and Woo Hyun’s romance in four season starting from Spring, Summer, Autumn and Winter.

First the still cuts showed Sueng Hee and Woo Hyun who are wearing a comfortable clothes and gives off a refreshing and the charm of spring season.

Seung Hee and Woo Hyun were seen walking side by side under the umbrella in the middle of heavy rain of summer that captured the viewers attention because the two of them showed a fresh atmosphere of summer as they’re smiling and enjoying the season. The two of them were also seen wearing a slightly layered clothes as they enjoy the autumn season.

Then Seung Hee and Woo Hyun were wrapped in a warm fabrics and clothes in the middle of winter season as they walk on the snow covered pavement that gives off a romantic atmosphere. ‘On Your Wedding Day’ has just released the still cuts of the romance story between Seung Hee and Woo Hyun in four seasons that make the viewers want to fall in love and they’re expected to heat up the theater this summer.

Meanwhile, ‘On Your Wedding Day’ will be released in August 22nd in Korea.

August 15, 2017 Tri Comments Off on ‘Goblin’ Becomes the Korean Drama With The Highest Rating In Taiwan
DRAMA VIDEO

May 16, 2017 Tirta Comments Off on Ok Joo Hyun Talks about Her Latest Drama Musical, ‘The Bridges of Madison Country’