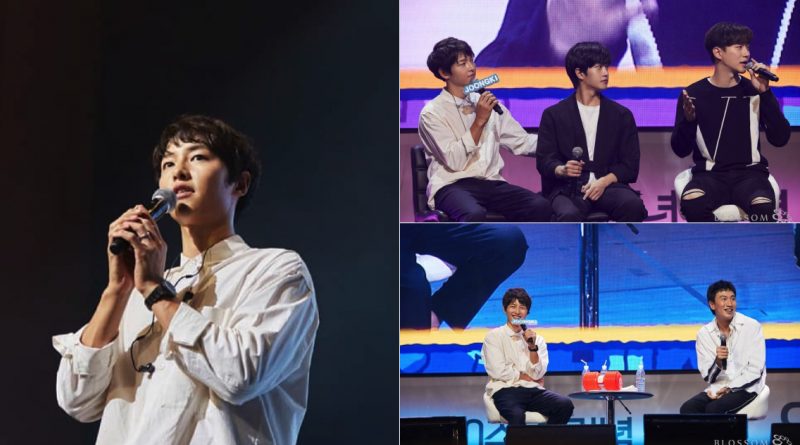 Song Joong Ki who appeared as the main character in the red carpet reminded us on his appearances in the awards ceremony as he started his celebration of 10 years debut anniversary by the gift that has been prepared by his fans. The official fan club of Song Joong Ki has prepared a beautiful flower bouquet from his fans all over the Asia including China, Taiwan, Hong Kong, and Singapore.

In the first session of talk show, Song Joong Ki reminisce his acting career as his works for the past 10 years since his debut. He also honestly revealed his point of view and his ideas about acting and every episode of his drama that full of hardship yet he had successfully finished them.

Next, the actor Song Joong Ki transformed into an MC and did the solo talk show where he reads the letter that his fans have wrote for him and he also reads his letter to his fans.

Song Joong Ki also wrote a handwritten letter which said “I feel strange and amazed that this year is my 10 years anniversary of my debut. I am very proud of myself and I keep saying to myself that I’ve worked hard and I’ve met a lot of good colleagues. I often feel lonely and tired but I finally made it here.” He said then he added, “starting from now on I will run again for another 10 years. I wll work hard to show all of you a better performance and a better work hard. I am so happy that I get to spent these past 10 years with all of you. I love you”.

He also went off the stage to greet the fans who wanted to see him closer. After the fan meeting ends, the fans were seen leaving the arena.

July 6, 2017 Tirta Comments Off on An Interview with ‘The Villainness’ Actress, Son Min Ji