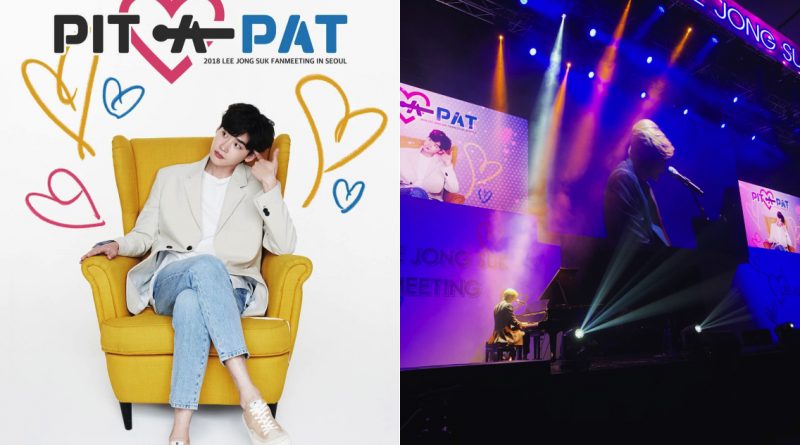 Actor Lee Jong Suk spent one summer night that felt like a dream with 3000 fans.

The fan meeting 2018 LEE JONG SUK FANMEETING PIT A PAT was held in KBS Arena hall in Gangseogu, Seoul at 1st of September. The event was full with emotions and fun and has captured total 3000 fans who came to the concert hall since early in the morning to prepare themselves to met Lee Jong Suk. The fans not only from Korea but also from Japan, China and also Southeast Asia that came all the way to Korea and it has proved the strength of Lee Jong Suk as the hallyu star.

The fans can see his next work that they’ve been waiting for. In the fan meet, he released the special trailer for the SBS drama ‘Death Song’ which is his first challenge on the short drama, he also added the expectation of the viewers through his perfect melodies and also the dazzling visual of him.

His piano performance has become the talk of the town since his Japan fanmeet and now he showed them the upgrade version of it. He also performed a perfect song that perfectly fit the melody such as ‘July’ and ‘My Soul’ along with the band performances and he also perform the soundtrack of his drama ‘While You were sleeping’ entitled ‘Do You Know’.

Singer Roy Kim who is also sing the OST of his drama and one of his close friend, actor Shin Jae Ha also appeared as the special guest that completed his performances.

Meanwhile, Lee Jong Suk will greet his fans in Taipei, Taiwan and Bangkok, Thailand in 9th and 15th of September.