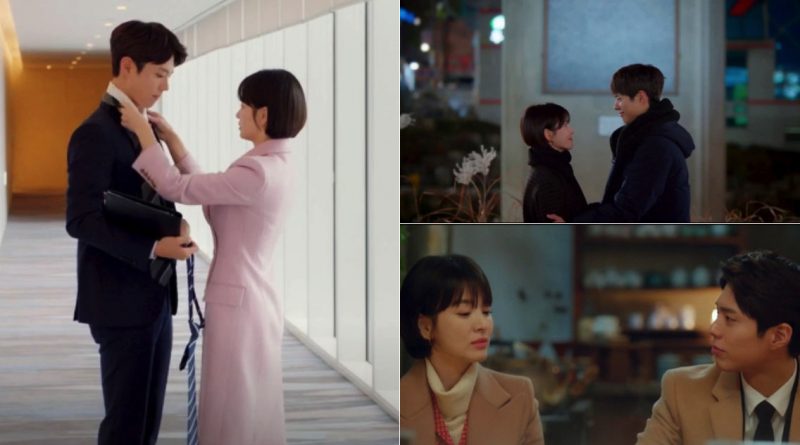 In the sixth episode of tvN new drama ‘Boyfriend’ that aired in 13th of December revealed Cha Soo Hyun (Song Hye Kyo) who started to accepted her feelings towards the young man. She took a step forward with Kim Jin Hyuk (Park Bo Gum), the innocent guy who insisted on taking a step closer to her life.

Cha Soo Hyun was slightly awkward and feeling strange but she tried hard to be honest to her feelings. Her changes were shown by her affection such as buying Jin Hyuk a tie and carefully put it on him while Jin Hyuk was slightly nervous at the sudden affection. The warm atmosphere between these two people in this drama made the viewers couldn’t take their eyes off the screen.

Especially since Cha Soo Hyun has decided to reveal her relationship with Kim Jin Hyuk in front of everyone made the viewers completely taken aback. Her confession is indeed unique because she was always careful on what she will say in front of the media and after realizing her sincere feeling towards Kim Jin Hyuk, she decided to do it. In the end of the episode, she touched the viewers heart by announcing that “We’re into each other” sternly.

The appearance of Song Hye Kyo that perfectly pictured Cha Soo Hyun’s brave side has captured the viewers attention. Now the viewers are anticipating more of emotional atmosphere in the drama. The viewers also happy to see Cha Soo Hyun stood up for herself and be honest to herself. At the same time, Cha Soo Hyun has successfully made the viewers feeling the spring in the middle of this winter. Because of Song Hye Kyo’s perfect performance, the drama ‘Boyfriend’ has gained another positive review.