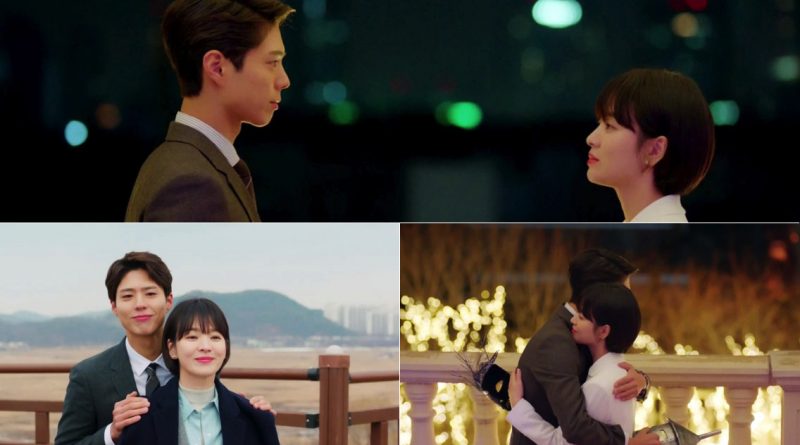 In the 8th inning of tvN drama ‘Boyfriend’ that aired in 20th of December showed the scene of Kim Jin Hyuk (Park Bo Gum) who was embracing Cha Soo Hyun (Song Hye Kyo) in his arms as they bid farewell.

In the previous episode that aired in 19th of December showed that Cha Soo Hyun went to overseas for a business trip meanwhile Kim Jin Hyuk was sent out of the province in force for unreasonable assignment. Upon knowing this, Cha Soo Hyun was really angry but Kim Jin Hyuk successfully calmed her down and soothes her by telling her that he accepted the job whole heartedly.

Kim Jin Hyuk told Cha Soo Hyun “Send me there. Please wait for my return eventhough I don’t know what the outcome would be” then he revealed his promise on protecting his love to Cha Soo Hyun.

Cha Soo Hyun who listened when Kim Jin Hyuk told her “I want to hug you” smiled shyly and said “Look at the way you’re talking” she said, could no longer hide her excitement towards Jin Hyuk’s words.

Meanwhile tvN drama ‘Boyfriend’ is a melodrama that tells a story of a fateful meeting between an ordinary and pure spirited man named Kim Jin Hyuk with Cha Soo Hyun, a woman who lives an unhappy life. This drama airs every Wednesday and Thursday at 9.30pm local time.