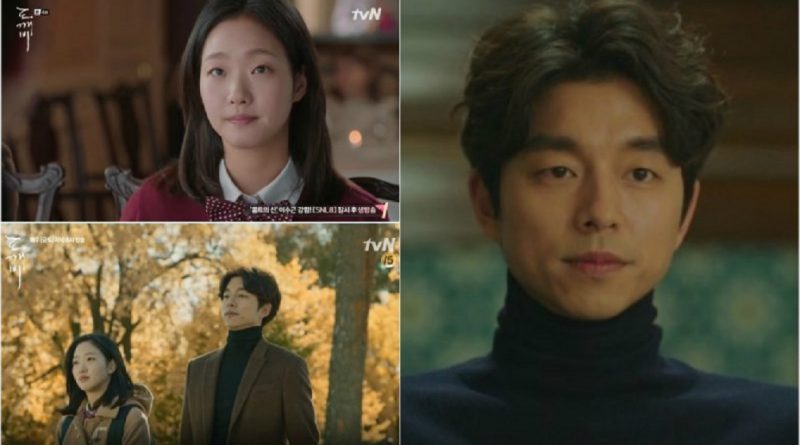 Part two of the fourth episode of this drama showed Duk Hwa (Yook Sung Jae) who asked Kim Shin (Gong Yoo) about the blooming flowers that were caused by the drunk Kim Shin.

Grim Reaper (Lee Dong Wook) seemed to miss Sunny (Yoo In Na) so much to the point that he started hallucinating and saw Sunny’s face everywhere.

Ji Eun Tak got very happy because Kim Shin picked her up. They showed a cute chemistry through the scene in the car before then they decided to grab a dinner together.

With Kim Shin’s power, the two soon arrived in Canada. They went to a steak restaurant and ate there, while Eun Tak who got curious about Goblin asked a lot of things to Kim Shin.

After they had finished their dinner, they walked around Quebec while enjoying the beautiful scenery there.

When they arrived in a park, Kim Shin sat down on a chair while the energetic Eun Tak walked here and there.

Eun Tak who was crossing the road got surprised because the zebra cross that she walked on changed color because of Kim Shin. She approached Kim Shin and asked whether it was him who did it. Kim Shin remained in silence, but quietly he read a romantic poem.

“An object does not need to be large to have a great mass. That girl, as tiny as a violet; that girl, drifting in the sky like the petals of a flower; draws me to her with a force greater than anything. In a single moment, I fell and rolled toward her just like Newton’s apple did. With a thump. With a thump-thump. My heart bounced from the heavens to the earth. It was the moment I’d fallen in love”.