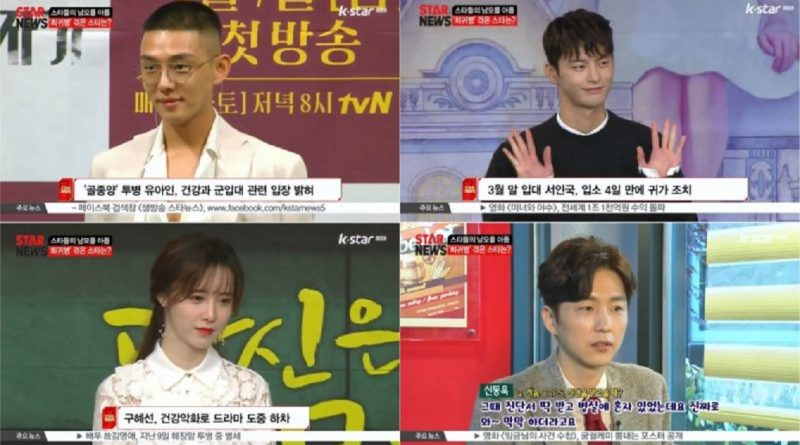 These days, news about celebrities who have unexpected illness have been emerging more frequently.

First, there is an actor who’s suffering from bone tumor, Yoo Ah In. During the press conference of his newest drama, Yoo Ah In said, “I recently did another health check in April 15, but I still have not received the result.” Previously, in 2013, Yoo Ah In had a shoulder injury. The result of his health check in 2015 was quite surprising, it said that he had injury and bone tumor.

Bone tumor is a tumor that develops inside our bone. Almost 90% of them are benign tumors. However, there is a bone tumor called osteocarcoma, which is a malignant bone tumor suffered by only about 200 people in a year. This fact is what made Yoo Ah In’s fans saddened by the news of his bone tumor.

Second is actor Seo In Guk, who had to be taken home after undergoing only 4 days of military service training in March. His agency said, “The reason is written as ‘left ankle injury’. There is still no definite schedule for the rest of his military service, because he has to receive further examination.”

The actor suffers from osteochondral lesion, a bone disease that causes the joints to be separated due to shock. Seo In Guk’s agency said that the actor is determined to continue his military service after receiving re-evaluation. Fans are worried about Seo In Guk because of this sudden news of his illness.

Third is actress Goo Hye Sun. In March, Goo Hye Sun decided to quit from her drama due to suffering from shock anaphylactic allergy. Anaphylactic is a shock that comes from allergy, which symtomps include dizziness and nausea because of food and drink, dusts, and insect bites, that could go on for 30 minutes or more. This illness might result in death. After getting discharged from the hospital at the end of March, Goo Hye Sun has become outpatients.

Last is Actor Shin Dong Wook, who was diagnosed with a chronic illness called CRPS. CRPS (Complex Regional Pain Syndrome) is an illness that is only suffered by one among sixty people. November last year, Shin Dong Wook came back as an SF novelist and answered a lot of questions regarding his career in the entertainment industry. It has been reported that Shin Dong Wook is going to make a comeback in MBC’s upcoming drama ‘Lookout’. Shin Dong Wook received public’s full support after 7 years hiatus from the drama screen. His latest drama was SBS ‘Pick Up the Stars’.

Behind their perfect appearance, a lot of stars turn out to have unexpected health problems. We will keep wishing for their well-being and supporting their activities.

May 20, 2018 Tri Comments Off on 4 Contract-Marriage Themed Dramas
FOOD Rank&Talk