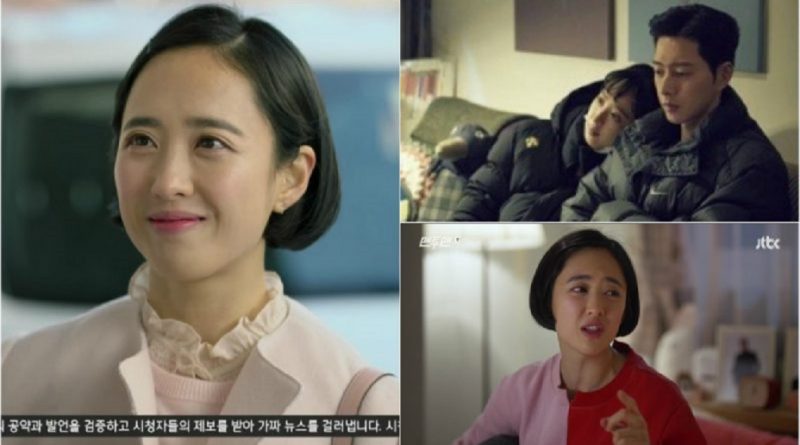 In the latest episode of Man-Man’s ‘Man to Man’ drama, the transformation of actress Kim Min Jung became the topic of conversation.

Kim Min Jung plays Cha Do Ha, the number 1 fan of hallyu star Yeo Woon Kwang (Park Sung Woong) who finally managed to become his manager. With her relaxed yet somewhat harsh nature, Do Ha pretends to be a strong man. But actually, she cries a lot, she is also an easily injured person because she has a sensitive heart. As a person who has never dated, Cha Do Ha can not hide her feelings. She is also a rather naive and frank woman.

In the previous episode, Cha Do Ha meets Kim Seol Woo (Park Hae Jin), a ghost agent pretending to be a bodyguard. To carry out his mission, Kim Seol Woo initially pretended to like Cha Do Ha. But finally he opened his heart and really fell in love with the woman.

In order to portray the character of Cha Do Ha, Kim Min Jung was willing to cut her hair in an old and strange cut. While at home she is accustomed to wearing simple clothes, Cha Do Ha could drastically transform into a beautiful woman in no time.

A representative of ‘Man to Man’ party says, “Starting from the middle of the drama, Kim Min Jung who plays Cha Do Ha will start her transformation and show her real acting skills. We hope the audience will continue to look forward to the next episodes. ”

Episode 7 of ‘Man to Man’, which will air on the 12th at 11:00 PM KST, will depict the thrilling situation of Seol Woo who is looking for a kidnapped Do Ha.

August 24, 2017 Tri Comments Off on [RANK AND TALK] 3 Korean Idols Who Have Unique and Charming Eyes
MUSIC Rank&Talk