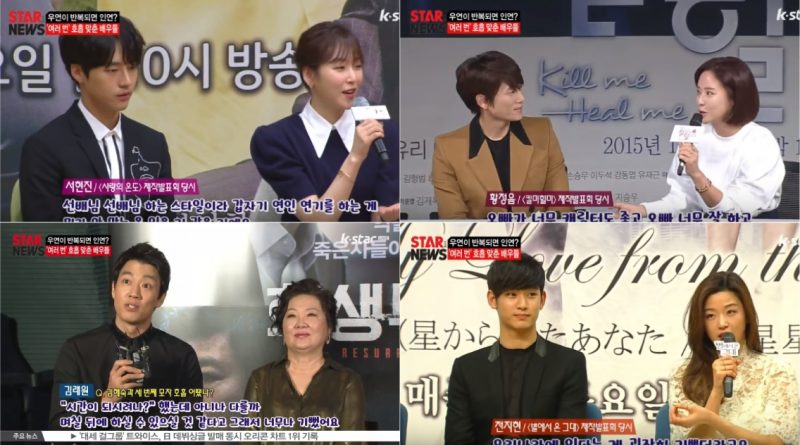 Recently, in the film ‘Resurrected Victims’ Kim Rae Won and Kim Hae Sook work together to show their chemistry for the third time. In fact they already look like a mother and her real child. Here are stars who have in the same title more than twice!

After ‘Sunflower’ in 2006 and ‘A Thousand Day’s Promise’, now Kim Rae Won and Kim Hae Sook are reunited in the movie ‘Resurrected Victims’ by acting as a mother and child. Recently, Seo Hyun Jin and Yang Se Jong show their chemistry in the drama ‘Temperature of Love’ after previously having a love line in drama ‘Romantic Doctor, Teacher Kim’.

Meanwhile, Lee Bo Young and Lee Sang Yoon meet again in the drama ‘Whisper’ after five years.  In addition, two famous actors who are known for their amazing chemistry are Hwang Jung Eum and Ji Sung. From the drama ‘Secret Love’ and in the drama ‘Kill Me, Heal Me’ both showed the perfect chemistry. Next, receiving love from 10 million viewers through the movie ‘The Thieves’ in 2012, Kim Soo Hyun and Jun Ji Hyun return to acting together in the drama ‘My Love From The Star’.

Having previously played together in the film ‘The Truth Beneath’ Kim Ju Hyeok and Son Ye Jin reunited after 8 years in the movie ‘My Wife Got Married’ with the role as a couple.

It’s hard to work together again, but some of these actors appear in the same title more than twice as a couple or a lover. Their special relationship is a result of the good chemistry they have. Let’s look forward to the acting performance of these couples.