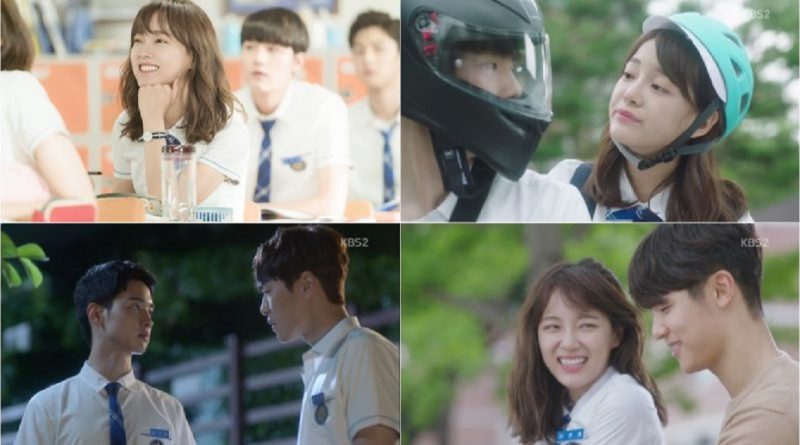 The episode was started with a narrative saying, “Exam. We all imagine the same thing in the middle of a tense situation. We hope the time will end as soon as possible so we could stop doing this exam. Then, one of us makes the imagination come true. My ordinary life as an 18-year-old student is starting to be something unexpected.”

Then, all the things that is related to rank in school began to be seen. As the one who occupied the last rank of the entire class, Ra Eun Ho had the least advantage. But then a chance came for her. She could enter a Webtoon Media Department if she could win a competition held in Korean University, a prestigious university in Korea.

When she is looking for materials for her webtoon, Ra Eun Ho was inspired by her first love, Jong Geun (Kang Min Hyuk). Then, she decided to draw a romance webtoon focusing on the life of someone who could stop an exam from happening by extracting water.

However, Eun Ho was caught in the middle of the class. Her sketchbook was confiscated. At that time, she felt that she was treated unfairly than Hyun Tae Woon, the son of the school director. In order to retrieve her sketch book, Ra Eun Ho went into the teacher’s office to steal it. Unexpectedly, she stumbled upon a guy who lit a sprinkler.

‘School 2017’ is truly a reflection of South Korean high school life. Through the characterization of Ra Eun Ho, Hyun Tae Woon, and Song Dae Hwi, the drama tried to show its viewers that there are more important things to achieve other than rankings.

May 21, 2018 Ria Comments Off on 3 Korean Dramas Which Tell Stories About Music
BEAUTY Rank&Talk

July 7, 2017 Tirta Comments Off on Song Joong Ki and Song Hye Kyo are Getting Married on October 31st
MOVIE VIDEO