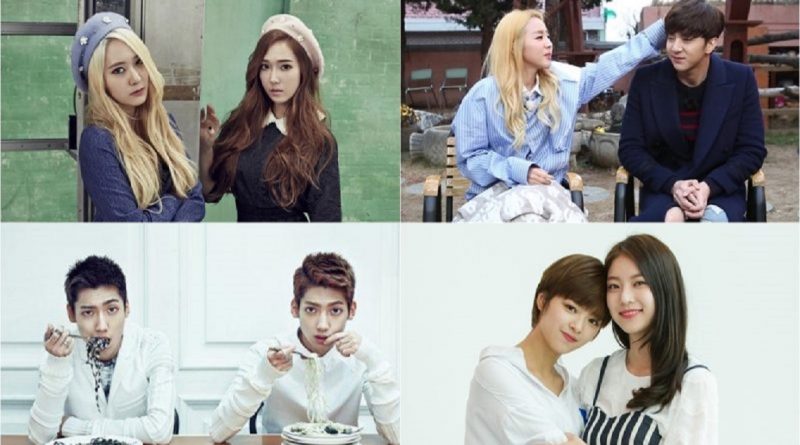 Having the same profession with your siblings will have its own advantage. There is a possibility in which a star has a sibling who is also an artist, whether they work as an actor, singer, or even an idol group member. They can support each other and have a positive impact on each other. Let’s see who is the Korean artist who has a sibling and is close to each other.

Working under SM Entertainment together, Jessica ex SNSD and her sibling, Krystal of f(x), are said to be close to each other. At first glance, both seem to have similar facial features and both have a beautiful visual. Both are known as ‘Jung Sister’ because of their name, Jung Soo Yeon (Jessica) and Jung Soo Jung (Krystal). Known to be quite close, Jessica and Krystal have their own tv programs in 2014 that show their daily lives. Unfortunately, in the same year, Jessica resigned from SNSD and SM Entertainment, though both still support each other and often did a photo shoot together.

Having a beautiful and popular sister does make others jealous. But having a handsome and successful brother is also a pride on its own. Maybe that’s what we feel when we see Sandara Park and Thunder. Sandara and Thunder are siblings who often show their affection in every variety show. Both are born from a famous group which brings their name even popular. Although 2NE1 has disbanded and Thunder is no longer with MBLAQ because his contract has ended, but that doesn’t stop them to shine in the industry. Sandara and Thunder are both active as an actor and an actress.

Unlike the siblings who have been mentioned, Young Min and Kwang Min are twin brothers! Moreover, both joined in the same group, Boyfriend. Young Min was born a few seconds earlier than Kwang Min and made him the older brother. In the group, Kwang Min is a rapper while Young Min is a lead dancer and a vocalist.

Gong Seung Yeon, who is the older sister, has joined first into the entertainment industry as an actress. She debuted in 2012 through the drama ‘I Love Lee Tae Ri’. While her sister, Yoo Jung Yeon followed 3 years later as a member of an idol group named TWICE. Having a different profession but still in the same field is fun. Jung Yeon and Gong Seung Yeon have become the MCs of SBS’s ‘Inkigayo’ music show alongside actor Kim Min Suk in 2016.

June 16, 2017 Tirta Comments Off on Who Catch the Flower Bouquets at Celebrity Weddings?
STAR VIDEO