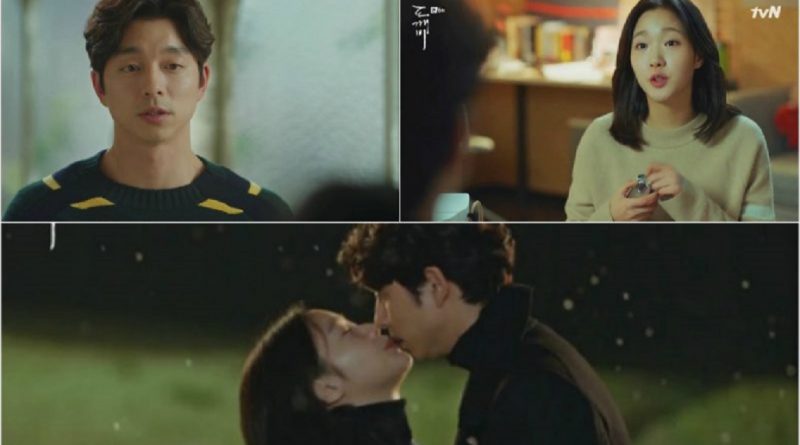 Part two of the 6th episode of ‘Goblin’ was opened by a sweet scene between Kim Shin (Gong Yoo) and Ji Eun Tak (Kim Go Eun).

Ji Eun Tak who was full of curiosity asked Kim Shin about many things, from her future to her mother.

Eun Tak was so fully in joy when she saw a Christmas tree in their house. She turned around and was about to pull the sword from Kim Shin’s chest, but he acted as if he was busy. He went to the Grim reaper’s tea house and told him that Eun Tak wanted to pull the sword out his chest.

Eun Tak asked Kim Shin when he wanted her to pull out the sword. They made a pact that Eun Tak would pull the sword out when the first snow fall. However, Kim Shin always avoided her and told her to do it the next day over and over again.

It turned out that he was preparing for his death. He gave a final message to Duk Hwa’s grandfather who had been faithfully serving him. He gave the Goryeo Queen painting to him and asked him to burn it. He also met Duk Hwa and gave him a credit card.

Kim Shin also called Grim reaper through a video call, but it became a funny scene because both of them still couldn’t operate their smartphones well.

Then finally, he met Eun Tak and gave her presents. Even though Eun Tak was confused by his behavior, she still accepted the gifts happily.

Afterward, Kim Shin took Eun Tak to the garden of buckwheat flower. Suddenly snow started to fall. That reminded Eun Tak of their promise. Kim Shin had also prepared himself.

However, when Eun Tak wanted to pull the sword out Kim Shin’s chest, she couldn’t touch it. Kim Shin then scolded her because she couldn’t do her task. Then Eun Tak suggested that maybe they should do the thing like in fairy tales. Kim Shin who was wondering what she meant by that finally got his answer from the kiss that Eun Tak gave to his lips.