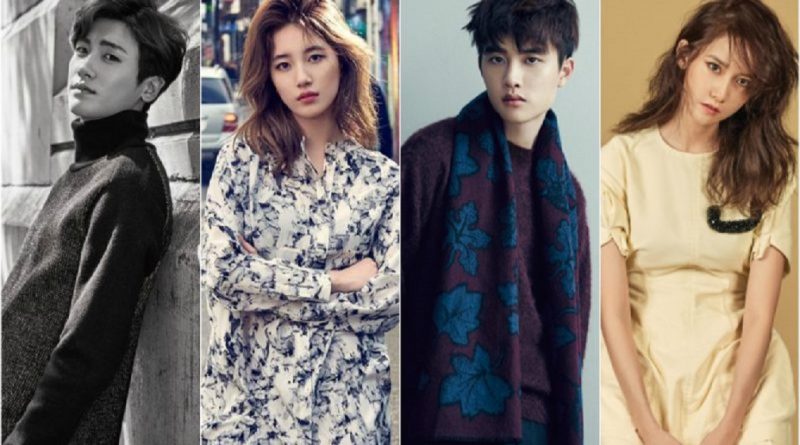 The former member of ZE: A has recently completed his final drama entitled ‘Strong Woman Do Bong Soon’. Previously, Park Hyung Sik has been known for his character through several popular dramas such as ‘The Heirs’ in 2013, ‘What Happens to My Family?’ In 2014, ‘High Society’ in 2015, and also ‘Hwarang’ in 2016. In addition, Park Hyung Sik has also won two awards in the ‘Best Actor’ category at the ‘2014 KBS Drama Awards’ and ‘2015 SBS Drama Awards’ awards.

Suzy started her career as a member of ‘Miss A’ under JYP Entertainment. In 2011, Suzy tried her first acting through KBS ‘Dream High’ and she was praised for her acting skills. In 2012, Suzy plays her first film titled ‘Architecture 101’ and the character she plays successfully won her the Best New Actress (Film) Baeksang Art Awards. Until now, Suzy has earned many awards and some of them are Baeksang Art Awards and Seoul International Drama Awards.

The actor who has the stage name D.O debuted as a singer in the male group ‘EXO’ in 2012. In 2014, Do Kyung Soo plays in his first big screen movie titled ‘Cart’. In the same year, Do Kyung Soo also plays in SBS ‘It’s Okay It’s Love’ drama with Jo In Sung, Gong Hyo Jin, Lee Kwang Soo and Sung Dong Il. His role in the drama ‘It’s Okay It’s Love’ gave the audience a lasting impression that it was no wonder he won 4 awards for the character ‘Han Kang Woo’ that he brought.

This beautiful girl that was born in 1990 is a girl group member Girl’s Generation (also known as SNSD) since 2007. Yoona made her acting debut in 2007 in the drama “Two Outs in the Ninth Inning” as a supporting cast. In 2008, Yoona got a lead role in the family drama ‘You Are My Destiny’ which aired on KBS station. Since then, he has always been trusted to be the main actor in the dramas he plays like ‘Cinderella Man’, ‘Love Rain’, ‘Prime Minister and I’, and ‘K2’. Since 2008 to date, Yoona has won 7 awards.