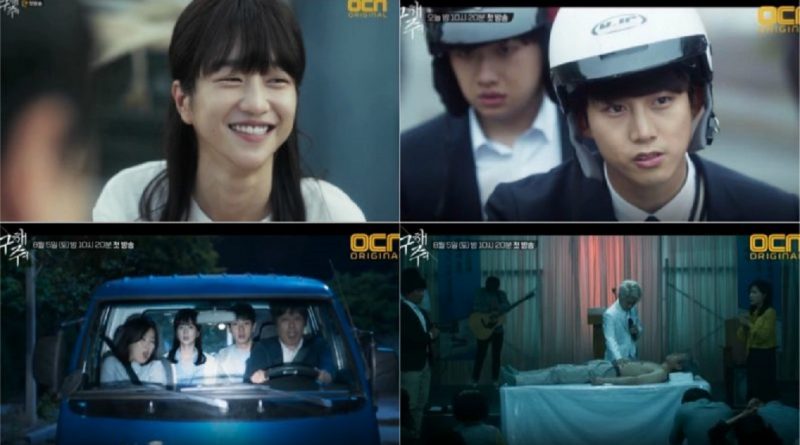 On Saturday’s episode of ‘Save Me’ (8/5), Im Sang Mi (So Ye Ji)’s family left Muji to escape the pseudo religion in that city.

However, in the middle of the way, the vehicle that Sang Mi’s family used got fire, which made the whole vehicle exploded. On another hand, in Muji, Baek Jung Ki (Cho Seung Ha) took a black and red liquid from a cancer patient’s body to demonstrate how to treat cancer patients. There was also a scene where the followers of the pseudo religion sang and danced, which was quite a surprise.

Back to Sang Mi’s family, there were four guys, Han Sang Hwang (Taecyeon), Seok Dong Cheol, Woo Jung Hoon, Choi Man Hee wearing a black raincoat under the heavy rain who appeared to save her family. The four young men rode motorcycles and approached the family nervously, but they showed a warm face at the car service center and spoke with a funny regional accent.

Ok Taecyeon’s mysterious appearance in the drama, Cho Seong Ha’s transformation with his white hair, and the editing which made the drama looks like a movie was completed with convincing acting from the casts. ‘Save Me’ was met by warm responses from the audience.

February 28, 2017 Tri Comments Off on Gong Yoo to Hold A Fundraising Bazaar With Fans
DRAMA VIDEO