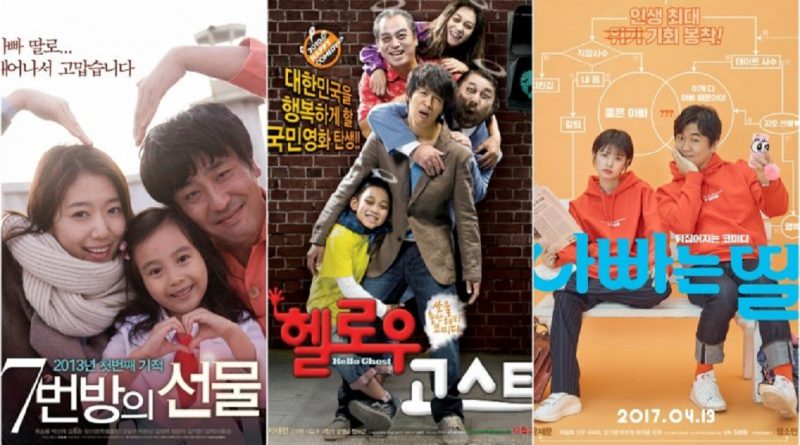 The film that aired in 2013, is starring Ryu Seung Ryong, Kal So Won, and Park Shin Hye. Miracle in Cell No. 7 is a movie that inserts comedy aspects within its touching storyline about a father and his daughter. Miracle in Cell No.7 is about a mentally handicapped man who was imprisoned because he was accused of killing a girl. While he is inside a prison cell, a group of prisoners helps him to meet his daughter because they don’t believe in the accusation that falls to him.

Hello Ghost is about a man named Sang Man (Cha Tae Hyun) who always fails every time he tries to commit suicide. One day after he failed in a suicide plan, he suddenly could see a ghost family consisting of father, mother, small child, and a grandfather. From that moment on, the ghosts did not want to leave Sang Man so Sang Man offered to grant their request so that they can leave immediately. Hello Ghost is starring Cha Tae Hyun, Kang Ye Won, Lee Mun Su, Ko Chang Seok, Jang Young Nam, and Chun Bo Geun.

3. Daddy You, Daughter Me

Daddy You, Daughter Me is a 2017 film starring Jung Seo Min and Yoon Je Moon. The film is about a student named Do Yeon who does not have a good relationship with her father who always scolded her to always study. Do Yeon’s dream is to go on a date and finally the opportunity comes. While the father’s dream is to be promoted, and in the end he got the opportunity too. But when they have to face an important thing, the father and his child suddenly exchanged body.