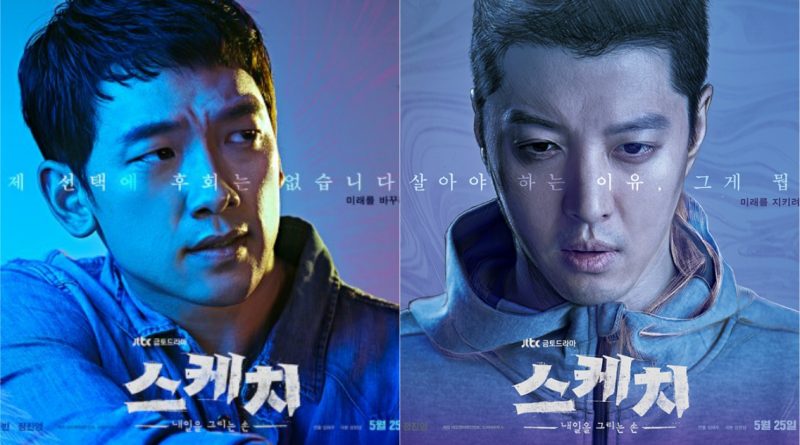 JTBC newest drama entitled ‘Sketch’ has released its newest posters. ‘Sketch’ is an investigation and full of action drama that told a story of people who work so hard to change the future. A detective who lost his wife will join a woman detective who can draw the future within 72 hours to capture the murders.

First, Kang Dong Soo (Jung Ji Hoon) a tough detective that witnessed the death of his wife in the sketch and struggle to do anything to change the future within 72 hours.

A special force sergeant Kim Do Jin (Lee Dong Gun), a man who tried to protect the future. Do Jin who failed to protect his wife after he promised her that he will protect her throughout her life looked completely stressed out with words “My Reason to live, what would it be?” on his poster.

Last but not least, there is Jang Tae Joon (Jung Jin Young), a man who seek for the future. The background of Tae Joon is still unknown yet he is the man behind Do Jin. The word “The Iceberg is even bigger deep down there” is written on his poster and his mysterious look added the thrill to his secret identity.

August 2, 2017 Tirta Comments Off on The Rise of Idol Actresses in Korean Dramas
STAR VIDEO

April 7, 2017 Tirta Comments Off on An Interview with Hyun Woo, the Icon of ‘Attentive Boyfriend’ in Dramas
MOVIE VIDEO