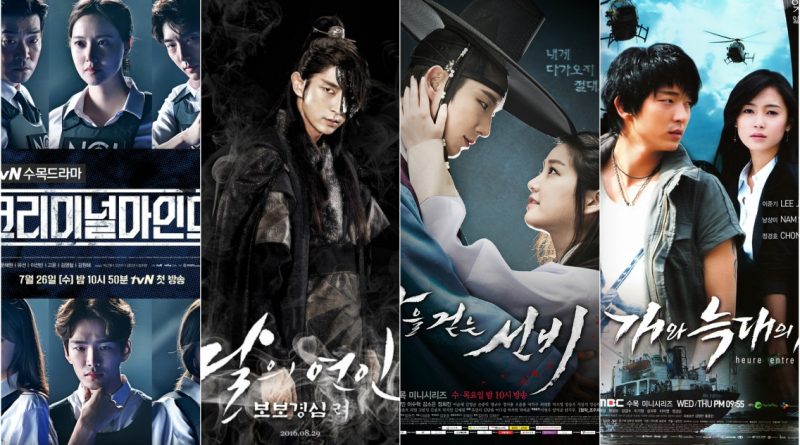 This drama tells a group of highly trained profilers in a fictional National Criminal Investigation (NCI) team that tracks criminals and solves cases. Lee Joon Ki plays the role of Kim Hyun Joon, his insolent temperament traits have made him at odds with NCI team leader Kang Ki Hyung (Son Hyun Joo) and an analyst and agent of NCI, Sun Woo (Moon Chae Won) in certain moments but he quickly proved his worth with his attention to detail, sharp instinct and accurate profile-making skills.

In this drama Lee Joon Ki became the main actor along with IU. Telling about a 25th-century 25-year-old woman, Go Ha Jin (Lee Ji Eun), who was brought back in time to the Goryeo Dynasty. She woke up in 941, in Hae Soo’s body and there, he met many royal princes from Wang’s ruling family. She initially fell in love with Prince Wang Wook (Kang Ha Neul) who was gentle and warm, and then Wang So (Lee Joon Ki), a frightening Fourth Prince who hid his face behind a mask and labeled a ‘wolf dog’ insult. Meanwhile, rivalry and politics take place among the princes, in a throne fight, as Hae Soo finds herself unknowingly caught in between.

The drama was set in Joseon dynasty where Jo Yang Sun (Lee Yoo Bi) is the daughter of a nobleman whose family lost everything when her father was trapped for treason. To meet her needs, Yang Sun began dressed as a male bookseller and met a handsome and mysterious scientist Kim Sung Yeol (Lee Joon Ki), who works at Hongmungwan. Sung Yeol is a vampire, and he is constantly haunted by the death of his long-time love of Lee Myung Hee (Kim So Eun), especially when he meets Myung Hee in present day, Choi Hye Ryung, the noble daughter. Meanwhile, the evil vampire, Gwi (Lee Soo Hyuk), lives in the royal palace and uses his political powers and intrigues to prevent the Crown Prince (Shim Chang Min) ascending to the throne.

This drama tells Lee Soo Hyun who witnessed how his mother was killed by a criminal syndicate called Cheongbang Thailand. After the incident, he was adopted by a family of NIS agents, Kang Jung Ho. Along with Kang Min Ki’s son from Jung Ho, Soo Hyun becomes an NIS agent. When he was 12 years old, he met a beautiful girl named Seo Ji Woo and the two became close to each other. One day, Soo Hyun performed an operation dealing with Cheongbang. But the memories of his childhood made him come back empty-handed. The head of NIS, Jung, then proposed to Soo Hyun to infiltrate Cheongbang. Soo Hyun also agreed and disguised. By hiding his true identity, Soo Hyun infiltrated Cheongbang with the intention of taking revenge. But there is one thing Soo Hyun does not know, that Ji Woo is the daughter of the villain who has killed his father and mother.