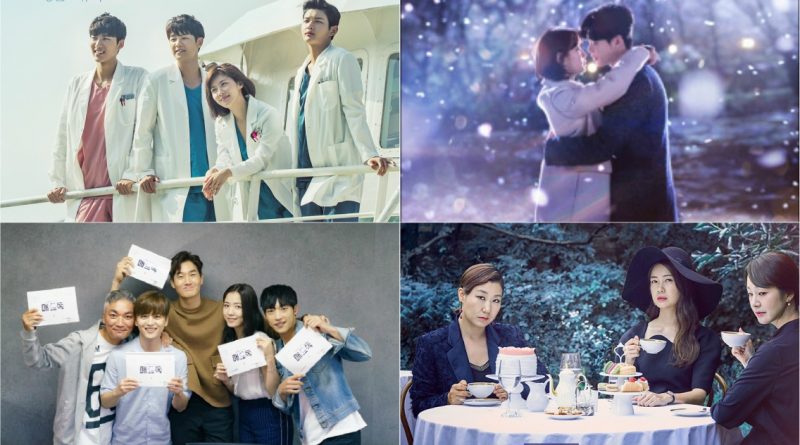 Drama-Wednesdays are often said to be the best dramas of various television stations. Therfore, many viewers are looking forward to the broadcast of Wednesday-Thursday dramas. There are currently 4 dramas on Wednesday, 2 of which are being aired and 2 more will be airing on October 11th. The following are the 4 dramas that are ready to captivate the viewers.

MBC’s drama ‘Hospital Ship’ began airing on August 30th and instantly managed to get the highest rating. ‘Hospital Ship’ tells about doctors who have different stories about medical events on an island where there is no adequate infrastructure. So they have to communicate with the people on the island and show the sincerity of a doctor. Ha Ji Won (Song Eun Jae), Kang Min Hyuk (Kwak Hyun), Lee Seo Won (Kim Jae Gul), Kim In Sik (Cha Joon Young) and others play a role in this drama. Song Eun Jae is the best surgeon and performs humanitarian activities. In order to regulate her physical strength, Song Eun Jae starts the day with a morning run at dawn. The same thing happened late at night when everyone was asleep. Eun Jae finishes the day by drawing the results of the operation she has done. Behind her remarkable abilities in the ship’s hospital, she is constantly improving her ability to make everything in the ship hospital to surgical operations well.

While You Were Sleeping

SBS ‘While You Were Sleeping’ that aired on September 27th managed to attract viewers. The drama starring Suzy (Nam Hong Joo) and Lee Jong Suk (Jung Jae Chan) got high ratings but has not been able to surpass the drama ‘Hospital Ship’. This drama is a romantic fantasy that tells the story of a woman named Nam Hong Joo who can see the accident through her dream and Jung Jae Chan, the prosecutor who prevents the dream come true. Jung Jae Chan played by Lee Jong Suk has many shortcomings in contrast to a prosecutor who always looks cool and charismaticm but, his unique charm remains visible. The silly appearances that both have not been shown to date have explained why the drama is awaited. Not just a romantic comedy, Hong Joo who can see the future through her dreams will give a fantasy story and a sad message in ‘While You Were Sleeping’.

KBS ‘Mad Dog’ will begin airing on October 11th. ‘Mad Dog’ directed by Hwang Ui Kyung and written by Kim Soo Jin. The drama stars Yoo Ji Tae (Choi Kang Woo), Woo Do Hwan (Kim Min Joon), Ryu Hwa Young (Jang Ha Ri) and others. ‘Mad Dog’ is an insurance crime drama that reveals the reality of insurance crimes in Korea. This drama will describe the activities of insurance crime by the investigation team ‘Mad Dog’ and will create a new genre. Yoo Ji Tae plays the veteran’s strongest insurance investigator with a 99% fraud incompetence rate that is never unresolved once. Yoo Ji Tae is rated as an actor who freely expresses gentleness, sharpness, coolness and warmth. It stimulated curiosity about how his wide acting spectrum will be shown in ‘Mad Dog’ as Choi Kang Woo.

tvN ‘Avengers Social Club’ will also be airing on October 11th replacing the drama ‘Criminal Minds’. ‘Avengers Social Club’ tells of a revenge plan by the daughter of a chaebol Kim Jung Hye (Lee Yo Won), a fish seller in Hong Do Hee (Ra Mi Ran) market, and an orphan Lee Min Suk ( Myung Se Bin). The drama is expected to captivate viewers with stories that pierce the mind in a cruel reality. Kim Jung Hye is the daughter of a chaebol who has lived a brilliant life who seems to have nothing, but she really has nothing but money. There is nothing like a parent’s love, friendship, or romance, and she has nothing to do with emotion like ordinary people. Lee Yo Won tries to express her feelings directly and frankly to emphasize the charm of innocent characters like a child, especially hidden under a poker face without expression. She also took care of her style to look more feminine. This is why the audience is excited about Lee Yo Won’s changes that showcase her beautiful feminine beauty.