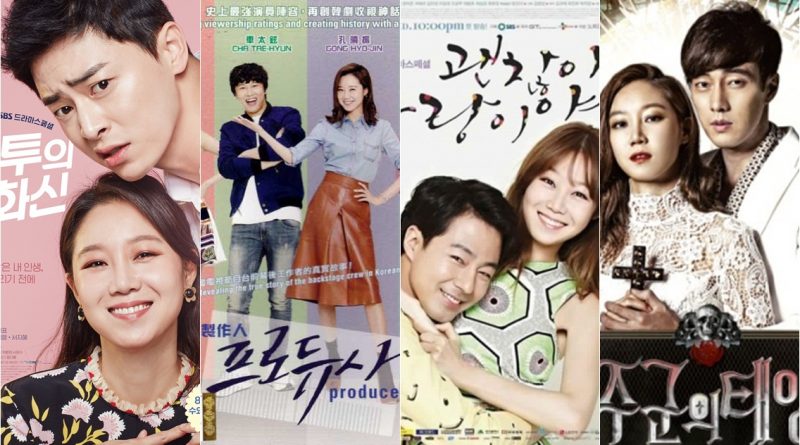 Gong Hyo Jin is a popular South Korean actress who was born on April 4th, 1980. Her age is not young anymore, but she still exists in romantic comedies and often paired with younger actors. Her tall and proportional figure make her shine and look younger. She is best known as the lead character in 2008 through ‘Crush and Blush’, and she gains popularity through dramas ‘Sang Doo! Let’s Go to School’, ‘Thank You’, ‘Pasta’, ‘Greatest Love’ and others. Gong Hyo Jin has moved to Australia with her mother and sister while her father remains in Korea. In 2011, she was named one of the ambassadors of ‘Year of Friendship’ for the 50th anniversary of bilateral relations between Australia and South Korea. Here are some dramas that make Gong Hyo Jin’s name becomes popular.

Released on August 24th, 2016, the drama features a romantic comedy genre consisting of 24 episodes and aired on KBS. It tells the story of a romantic story and competitive competition between television newscasters. Pyo Na Ri (Gong Hyo Jin) is a weather forecast reporter who has a simple background. She used to work part-time at a prestigious television station even though she was anxious to become an anchor.

Fierce competition occurs where she works. Her position as the weather forecaster is not appreciated enough by her colleagues, and this makes Pyo Na Ri often feels difficult and depressed. Plus, she has a crush on Lee Hwa Sin (Jo Jong Suk) who is a famous and arrogant anchor. When Hwa Sin ignores the presence of Pyo Na Ri, comes the figure of Go Jung Won, a chaebol descendant who offers love and sincerity to Pyo Na Ri. In addition to Gong Hyo Jin, Jo Jung Suk, and Go Kyung Pyo, the drama also starred Lee Mi Sook, Lee Sung Jae, and Park Ji Young.

The presence of many top stars as a cameo became the attraction of this drama. It aired on May 8th, 2015. ‘Producers’ is a drama that tells about producers and staff of a KBS program doing daily work to build creativity in order to maintain their own variety show ratings. The new employee named Baek Seung Chan (Kim Soo Hyun) is a new, careless and awkward figure. Ra Joon Mo (Cha Tae Hyun) is a senior producer who leads a variety show ‘2 Days 1 Night’.

The show is facing a major problem and threatened will soon be stopped. This is because of the declining rating and the numerous warnings from the television broadcasting commission due to some mistakes during the airing. Conflict becomes more complicated when Seung Chan is chosen to join Joon Mo’s 2 Days 1 Night team. Seung Chan starts falling for the senior producer who leads a music broadcast named, Tak Ye Jin (Gong Hyo Jin). Through Joon Mo and Ye Jin, Seung Chan starts learning to become a true producer. IU plays the role of Candy, a singer who is interested in Seung Chan. Due to the background of the TV station, many of the top stars are also present as a cameo, such as Lee Seung Gi.

The drama ‘It’s Okay, It’s Love’ starring handsome actor Jo In Sung and all-around actress Gong Hyo Jin aired on SBS channel in 2014. ‘It’s Okay It’s Love’ tells of a love affair between a famous and handsome novel writer named Jang Jae Yeol (Jo In Sung). Due to an illness, Jang Jae Yeol can only fall asleep in the bathtub.

Then he meets a psychiatrist named Ji Hae Soo (Gong Hyo Jin) on a television show when the two are present as guest stars. Although the two often fight, they later grow feelings for each other. The love affair begins to intertwine, and it is known that Jang Jae Yeol has a mental illness that makes him hallucinate about Han Kang Woo (Do Kyung Soo) a high school student who claims to be his big fan. Ji Hae Soo tries to heal Jang Jae Yeol and heals herself from an inner wound.

‘Master Sun’ is a romantic comedy-drama with horror elements. It is about Tae Gong Sil (Gong Hyo Jin), a woman who has an accident so as to see and communicate with ghosts. Actually, Tae Gong Sil is a timid person and felt troubled by the power. She is unable to live her life normally because it is shrouded in fear. She is rejected when applying for several jobs and has to stay on a roof of the inn and clean it up. While Joong Won (Seo Ji Sub), a handsome man, wealthy, and is the owner of a shopping center called Kingdom is very materialistic and concerned about money.

Their story begins when Gong Sil realizes that if she touches Joong Won, then the ghosts that haunt her will disappear. Finally Gong Sil decided to work in Kingdom Shopping Mall and rely on Joong Won. Joong Won also borrows Gong Sil ability to increase his wealth. Who would have thought that the ability of Gong Sil is able to reveal the death of Joong Won’s ex-girlfriend Hee Jo (Han Bo Reum). The drama ‘Master Sun’ aired in 2013 on the SBS channel.

June 11, 2017 Tirta Comments Off on ‘The Mummy’ and ‘A Day’, Two Movies that are Currently Very Popular in Korea
DRAMA VIDEO

August 6, 2017 Tirta Comments Off on Sooyoung Admits That Her Own Relationship with Jung Kyung Ho Has Helped Her Acting in ‘People You May Know’
MOVIE VIDEO