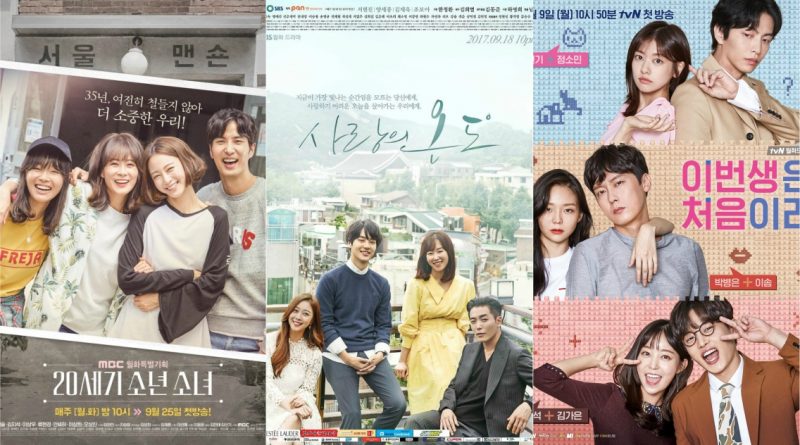 DRAMA
October 9, 2017 Ria 20th Century Boys and Girls, Because This Is My First Live, K-DRAMA, Temperature of love

‘Temperature of Love’ vs ’20th Century Boys and Girls’ vs ‘Because This Is My First Life’ The Battle of Monday-Tuesday Romantic Dramas has started.

Autumn is a sign of love. The competition for ‘romantic story’ in Monday-Tuesday will start on the 9th. SBS ‘Temperature of Love’  which currently gets the first position on Monday-Tuesday drama will compete with MBC ’20th Century Boys and Girls’ and tvN ‘Because This Is My First Life’. Nevertheless, each drama has its own character and its advantages so it will be difficult to choose one among the three dramas.

‘Temperature of Love’ tells the story of a man and woman who meet again after five years. This drama focuses on emotion rather than its occurrence. This drama is a tale of the love story of Lee Hyun Soo (Seo Hyun Jin), a writer and On Jung Seun (Yang Se Jong), a chef who has a soft voice.

Writer Ha Myung Hee has written a good story for this drama. The power of Seo Hyun Jin in acting naturally can be seen through this drama.

Its trademark is ‘Retro Filter’. Han Yee Seul said, “There is warmth among human relations.” She also added, “There are also factors that stimulate long and calm memories. The story can be understood with interests in it.”

Another point is the chemistry of the actors. Han Ye Seul, Kim Ji Suk, Ryu Hyun Kyung, and Lee Sang Hee try to get closer and become good friends. Han Ye Seul said, “I am acting with a sincere heart. I think that I can pass on this story to be well understood by the audience.”

‘Because This Is My First Life’

‘Because This Is My First Life’ is a drama that puts the imaginary side and reality of Yoon Ji Ho (Jung So Min) and Nam Se Hee (Lee Min Ki), a realistic new company designer.

Park PD had previously entertained the audience through the drama “Let’s Eat”. This drama deals with themes about homelessness, spoiled children, and so on. Due to a coincidence, a man and a woman will live in the same house and get used to each other’s presence and fall in love with each other.