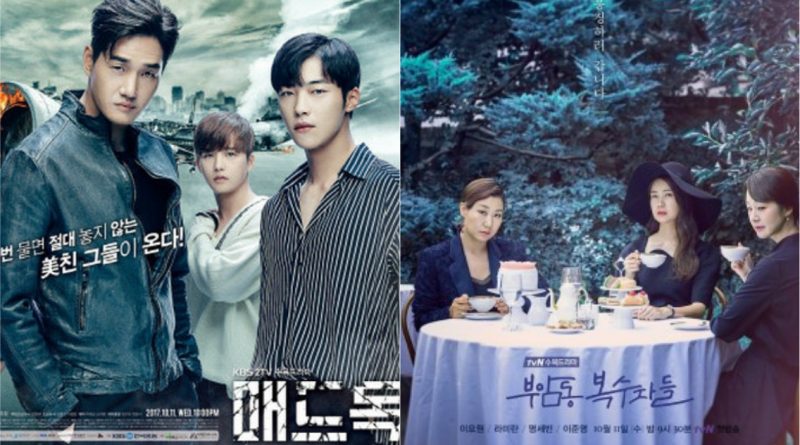 The drama ‘Mad Dog’ will unveil the reality in Korea through an investigation into the fraud committed by the insurer. This drama will give lessons to the people who do criminals through the story. With a new genre based on ‘insurance crime’, the drama is expected to enhance the sense of humanism based on the reality.

Woo Do Hwan plays the role of ‘Kim Min Joon’, a street fraudster. In the drama, Min Joon is a mysterious character who can change according to the conditions he faces, through the charm that Woo Do Hwan will show in this drama, the audience is getting interested. Moreover, the bromance between the two actors demonstrating extraordinary acting power increases the expectations of the viewers.

The drama ‘Avengers Social Club’ is a popular webtoon adaptation drama featuring the daughter of a chaebol, a fish trader in a traditional market and a professor wife at the university. Lee Yo Won, Ran Mi Ran and Myung Se Bin became the main actors in this drama. Three people who are not family or friends will be together for the same purpose of ‘revenge’.

Lee Yo Won acts as Jung Hye, a chaebol princess who forms ‘Avengers Social Club’, Ra Mi Ran plays Do Hee the oldest and a fish trader in the market, and Myung Se Bin plays the role of Mi Sook, a wife of a university professor. All three are expected to bring joy in the process of making a warm relationship. Even though they live in different environments and backgrounds, they are united for having the same purpose.

Both dramas are desirable because the two previous dramas ‘Manhole’ and ‘Criminal Minds’ are not getting a good rating. Moreover, MBC drama ‘Hospital Ship’ and SBS ‘While You Were Sleeping’ became their rivals for receiving great attention from viewers.

Not only good in terms of the story but also the extraordinary acting of the actors increase viewers’ expectations of the progress of the story. Will ‘Mad Dog’ and ‘Avengers Social Club’ solve the nightmare of KBS and tvN?