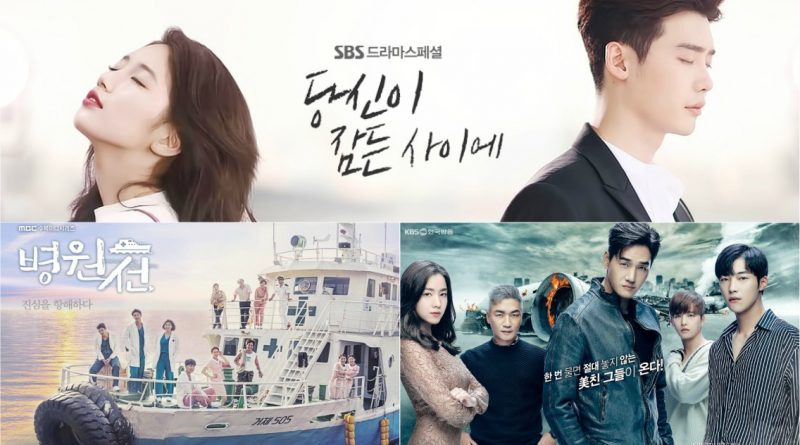 SBS’s Wednesday-Thursday drama ‘While You Were Sleeping’ showed Lee Jong Suk and Bae Suzy hugging each other and was ranked first again.

On episodes 9 and 10 of the drama ‘While You Were Sleeping’ which aired on the 11th, started with a scene of Hong Joo (Bae Suzy) who dreamed of herself in an accident. Apparently Hong Joo had the same dream before, and this dream was also the reason her mother forbade Hong Joo to return to work as a journalist and told her to work in a meat restaurant.

Furthermore, Hong Joo dreamed of a woman got burnt while receiving a statement of love, so she came to the scene with a fire extinguisher, then she sprayed it and ran off. Thanks to the appearance of Jae Chan (Lee Jong Suk) and Woo Tak (Jung Hae In), she managed to avoid the crisis.

Toward the end of the episode, Hong Joo decided to return to being a journalist after a long process of thinking, but upon arriving in front of the office, she found it difficult to cross the street. At that time, Jae Chan showed up and helped Hong Joo to get into the office quietly, after which Hong Joo wore a blue uniform as her new uniform, the uniform is the uniform she wore in her dream.

According to Nielsen Korea, the drama ‘While You Were Sleeping’ episodes 9 and 10 respectively earned a rating of 10.0% and 11.5%, beating the drama that aired at the same time which are MBC ‘Hospital Ship’ drama which earned each rating 6.7% and 8.4%, and the first episode of the Mad Dog drama that earned a 5% rating.