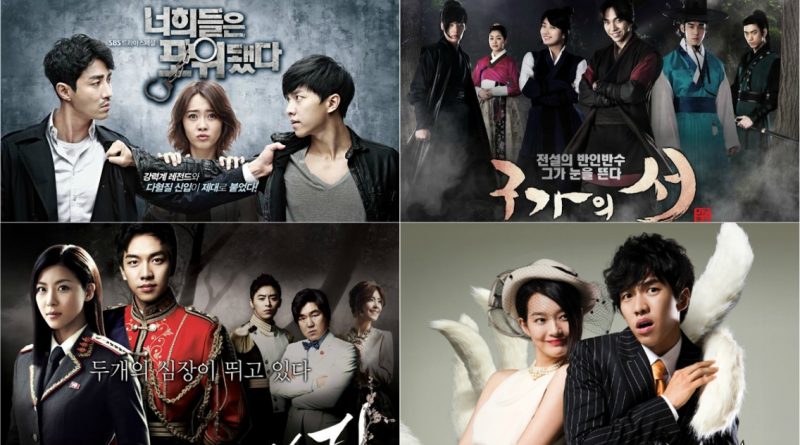 SBS drama ‘You’re All Surrounded’ aired in 2014. The drama is about 4 rookie detectives in their 20s working at a police station in Gangnam, Seoul, South Korea. The 4 rookie detectives are Eun Dae Koo (Lee Seung Gi), Eo Soo Sun (Go Ara), Park Tae Il (Ahn Jae Hyun) and Ji Kook (Park Jung Min). None of them dreamed of being a detective. Then they meet Seo Pan Seok (Cha Seung Won) who is the Chief Investigator for their team. They handle various cases including the old case of Eun Dae Koo and it turned out that Eun Dae Koo and Seo Pan Seok had met 11 years ago.

MBC drama ‘Gu Family Book’ starred Choi Kang Chi (Lee Seung Gi), Dam Yeo Wool (Bae Suzy), Park Tae Seo (Yoon Yeon Seok). Choi Kang Chi is a human half gumiho (a mystical creature) who tries to live as a normal human even though he cannot become a fully human being. Meanwhile Yeo Wool Dam is a beautiful girl who is a martial arts teacher and workss at her father’s school. As a child, she had saved Kang Chi from a dog attack and she never forgot Kang Chi. Later, they meet again and fall in love.

MBC drama ‘The King 2 Hearts’ starring Kim Hang Ah (Ha Ji Won), Lee Jae Ha (Lee Seung Gi). Lee Jae Ha is a handsome and matrealistic crown prince who does not care about politics. His life changed after his brother forced him to join a team consisting of people from North and South Korea to join the WOC. Kim Hang Ah is a special North Korean agent who has no experience of love even dating. When Hang Ah joins the Korean team for the WOC, she meets the arrogant prince. But unexpected events occur when they learn that their family is planning their marriage.

4. ‘My Girlfriend is a Gumiho’

SBS’s drama ‘My Girl Friend is a Gumiho’ starring Cha Tae Woong (Lee Seung Gi), Gumiho (Shin Min A). Cha Tae Woong is a student from a wealthy family who aspires to become an action star like Jackie Chan. He must have accidentally visited an old temple and packed Gumiho out of a five century old painting. Tae Woong tries to escape from Gumiho to the cliff and suffers a serious injury. Feeling sorry, Miho rescued Tae Woong with her magical power so Tae Woong’s wounds healed immediately. But when they spend time together, they fall in love and Miho turns into a human.