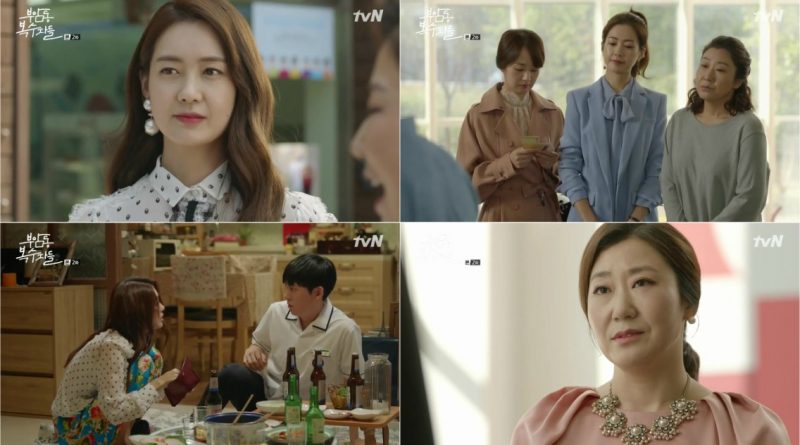 Lee Mi Suk advised Hong Do Hee to file a lawsuit against her child’s case at school. However, she was worried it will make it difficult for her son when entering college later when hearing that Kim Jung Hye immediately called a lawyer.

Kim Jung Hye and Lee Mi Suk took Hong Do Hee to the salon and changed her look to be strong, and her lawyer also gave her advice. Hong Do Hee remembered all the words she has to say, and after careful preparation, she met the parents of the bully.

However, unexpectedly the two threaten each other to sue and bring the case to the court, in the end Kim Jung Hye appeared. Kim Hye Jung who saw Hong Do Hee said, “Oh my god Do Hee, how come we meet again here” in a familiar tone. The two chatted in an awkward tone to show as if they were very close and eventually made a deal with 5 million won.

The three members of ‘Bok-Ja Club’ made a celebration at Hong Do Hee’s house. Kim Jung Hye and Lee Mi Suk call Hong Do Hee ‘Eonni’, as she is the oldest then they become closer. Kim Jung Hye was drunk from drinking too much, when she saw Hong Do Hee’s child, Kim Hee Su entered the house she immediately said, “Sit here”, then she added “Lucky you. Hong Do Hee is your mother. Give it to me, you’ll give me the money. Call Hong Do Hee eonni no matter what. I only have 2 million won”, she said in a drunken voice.

Kim Jung Hye who ended up sleeping at Hong Do Hee’s house, with an attitude that turned 180% different, got sober thanks to the noodles cooked by Kim Hee Su. She had been trying to make noodle all her life and love Kim Hee Su’s noodle so much.

On that day’s episode, Lee Yo Won showed her acting through the funny situation that happened to the rich people. Especially. her acting drunk deserves thumbs up. She realizes the original comic character very well. Meanwhile, Lee Soo Gyum, Kim Hye Jung’s illegitimate son revealed the reason why he came to the house for revenge, it further made the audience curious.