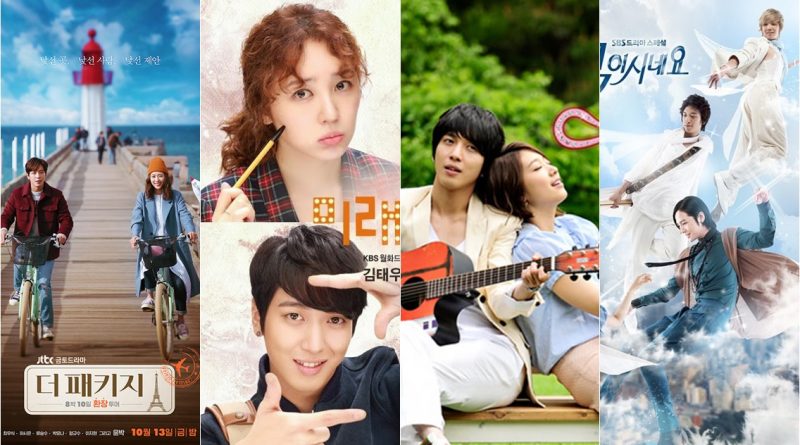 Musician and actor, Jung Yong Hwa is indeed a man with a million talents. The man was born on June 22nd, 1989. Jung Yong Hwa is famous as a vocalist of the famous band CNBLUE. Yong Hwa is the vocalist as well as the guitarist of the band. In 2009, he studied music in Japan with his members and began to enter the entertainment world in 2010. After the success of CNBLUE, Yong Hwa also wrote songs for other singers. He is also the first CN Blue personnel to challenge himself to enter the acting world. He made his acting debut through SBS drama ‘You’re Beautiful’ and co-acted with Park Shin Hye and Jang Geun Suk. Although not playing the main character, His charm and talent have stolen the spotlight.

The drama airing in October 2017 tells of Yoon So So (Lee Yeon Hee) who works as a tour guide in France. She leads the tour package group. All the tourists from Korea have a variety of stories and begin to build relationships through their journey. Starting from San Ma Roo (Jung Yong Hwa) who take on a holiday to relieve pain after his lover dumped him. Kim Gyung Jae (Choi Woo Sik) who has been dating for 10 years. Jung Yeon Sung (Ryu Seung Soo) who goes on holiday with a close friend. Han So Ran (Han Shi Eun), a web designer who selects singles. Oh Gab Soo (Jung Kyu Su) who is stubborn. Han Book Ja (Lee Ji Hyun) spends half of her life taking care of her husband. As well as Na Hyun (Park Yoo Na), a woman whose age is hard to guess. In the middle of them, there is a mysterious figure (Yoon Park) who always follows Yoon So So.

‘Future’s Choice/Marry Him If You Dare’ tells the story of Na Mi Rae’s life (Yoon Eun Hye). One day Mi Rae meets a woman who claims to be a future version of herself. She also follows various suggestions that this woman said to be able to live a new life. Mi Rae goes back in time to stop her marriage with a newsreader named Kim Shin (Lee Dong Gun). She also directs herself to take the right path and realizes her dreams in the future. The drama stars Yoon Eun Hye, Lee Dong Gun, and Jung Yong Hwa.

Misunderstanding has caused Lee Shin (Jung Yong Hwa) the leader of the arrogant group ‘The Stupid’ and Lee Kyu Won (Park Shin Hye), a Korean traditional music student, quarrel. Lee Kyu Won did not understand why Lee Shin became so popular that one day Kyu Won was forced to attend a music concert with her friend who was one of the fans of ‘The Stupid’. Then she saw the appearance of Lee Shin and immediately captivated by him. When Kyu Won decided to take part in the 100th-anniversary celebration, everyone saw his talent and potential, including Kim Suk Hyun (Song Chang Eui), the broadway composer who became the music director. She competed with Han Hee Joo (Kim Yoon Hye), to fight over the female lead role. Lee Shin also decided to join the musical because of his feelings for dance professor, Jung Yoon Soo (So Yi Hyun), a musical choreographer. Lee Shin and Gyu Won spend much time together and start falling in love.

The musical that aired in 2010 is Jung Yong Hwa’s first drama. It tells of Go Mi Nyeo (Park Shin Hye) who has been living in an orphanage with her twin brother, Go Mi Nam (Park Shin Hye) since their father died. Years later, her brother became a musical idol while Mi-nyeo lives in a nun’s dormitory. Mi Nam managed to win the audition as a vocalist in the band ‘ANJELL’ but he had to come to America for a failed plastic surgery. His manager approached Mi Nyeo to impersonate Mi-nam. Here, Yong Hwa plays one of the ‘ANJELL’ personnel named Kang Shin Woo. He is a calm and kind person. When the leader of ‘ANJELL’ continues to tease Mi Nam, Hwang Tae Kyung gives more attention to her.