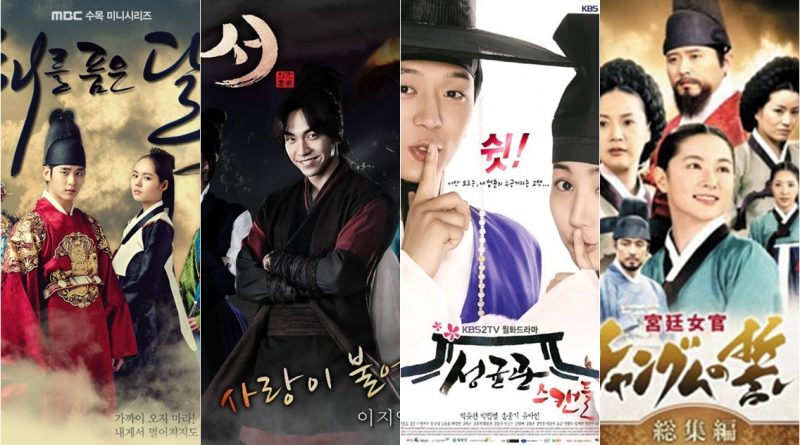 The word history often sounds boring and not entertaining. Nevertheless, history remains important and should not be easily forgotten. Korean dramas with historical backgrounds may have a purpose to introduce their past culture and history to young people. Here are 4 Korean dramas with Korean history background that became popular in Korea and Asia.

‘The Moon Embracing The Sun’ is a drama that aired in 2012 on MBC with a total of 20 episodes. The drama starred Kim Soo Hyun and Han Ga In. The drama is about the crown prince Lee Hwon (Kim Soo Hyun) and Prince Yang Myung (Jung Il Woo) who fall in love with a shaman named Heo Yeon Woo (Han Ga In) who does not remember her past. The drama with the theme of history and fantasy is adapted from a novel of the same title by Jung Eun Gwol. This drama is about the forbidden love of the Joseon Dynasty King and a shaman. The fictional story in the drama has won numerous awards, one of which is  for the Best Drama category at the 48th Baeksang Arts Awards.

MBC drama ‘Gu Family Book’ is played by Choi Kang Chi (Lee Seung Gi), Dam Yeo Wool (Bae Suzy), Park Tae Seo (Yoon Yeon Seok). Choi Kang Chi is a human half gumiho (a mystical creature) who tries to live as a normal human even though he cannot become a full human being. Meanwhile, Yeo Wool Dam is a beautiful girl who is a martial arts teacher and teaches at her father’s school. As a child, she had saved Kang Chi from a dog attack and she never forgot Kang Chi. Once they meet again and fall in love.

Sungkyungkwan is a university that has been around over 500 years. The drama tells 4 handsome young men who study in Sungkyunkwan and tell their romance and friendship stories against the background of the Joseon Dynasty. Kyun Yun Hee (Park Min Young) is a smart and independent woman. Since her father died, she had to work hard to support her family. In those days, women were not allowed to go to college while Yun Hee had a strong desire to learn. Finally, she disguised as a man then met Lee Seon Joon (Yoochun), an arrogant handsome man. Through this drama we can see the life of Korean students in the Joseon Dynasty era.

‘Jewel in The Palace’ is a drama played by Lee Young Ae and Ji Jin Hee. The drama premiered in 2003 on MBC with a total of 54 episodes. ‘Jewel In The Palace’ set about 500 years ago during the Joseon Dynasty, which tells of a woman named Seo Jang Geum (Lee Young Ae), who is part of the lower classes in the community. Nevertheless, she managed to overcome a series of social discrimination and become a royal chef. Eventually, she became a royal physician and became a physician in charge of the King. The drama is based on a true story about a girl named Jang-Geum, the first woman who became the highest royal physician of her time.