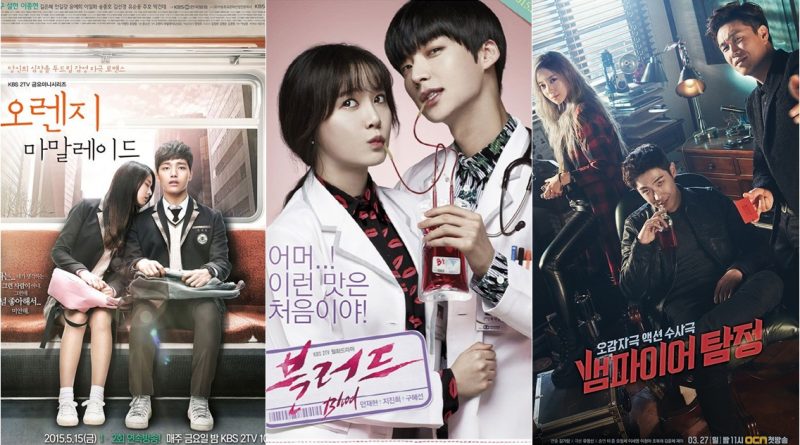 Vampire is portrayed differently in various countries. The vampire in China for example, is famous for its way of jumping and reaching forward. Meanwhile, in the western country, the title vampire which is better known by the name of Dracula who has pointed teeth and black robe. ISouth Korean version of vampire is also different. These four dramas have a vampire theme that might represent what the Korean version of vampire looks like. Let’s see the review.

The fantasy drama adapted from a webtoon describes a vampire figure whose life coexists with humans. The fate of vampire in this drama is actually afraid of humans because many get discriminated and ostracized. So they live in hiding and no longer rely on human blood to live. They disguise and work like ordinary people. Baek Ma Ri (Seohyun) is a teenage girl who hides her identity as a vampire and tries to live quietly in a new city. She accidentally bites Jung Jae Min (Yeo Jin Goo), her popular schoolmate.

This time, this vampire has a profession of a doctor. Park Ji Sang (Ahn Jae Hyun) is a specialist doctor of gallbladder hepato pancreato at cancer hospital. But he is actually a cold and emotionless vampire. Ji Sang covers his tender heart and longs for the closeness of the person he loves. He believed he could live like a human and withstand the thirst to drink blood. Instead, he treats the patient to reduce his longing. Then he falls in love with Yoo Ri Ta (Goo Hye Sun) who is the niece of the head of the conglomerate group of hospital owners.

Idol Lee Joon got a chance to play the character of a vampire. In addition, he is also a detective named Yoon San who suddenly become a vampire. In addition to his profession as a detective who must deal with criminal cases, Yoon Sang will also reveal the mystery that happened to himself. Lee Joon acting is considered very slick and strong in portraying his character. It is just that theendingg slightly disappointed the viewers.

Of the three dramas above, it can be concluded that vampires depicted in Korea, in contrast to vampires in general, but actually have similarities in appearance, lifestyle, and can mingle with other humans under cover. What do you think?