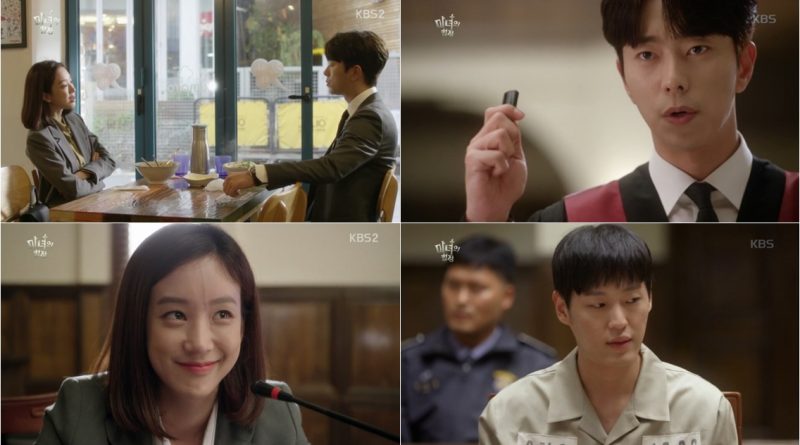 On the 17th of KBS 2TV’s M0nday-Tuesday drama ‘Witch’s Court’ episode 4, depicted Ma Yi Deum being the victim of a hidden camera case.

The situation went according to Kim Sang Kyun’s wishes. All the evidence from other victims was destroyed and only Ma Yi Deum’s video could be used as evidence. After all, Ma Yi Deum did not want to make her video as proof, Yeo Jin Wook (Yoon Hyun Min) asked her to submit the video as evidence for the sake of another victim.

There is one more thing that makes Kim Sang Kyun confident. He used an app on his tablet that will make the video disappear after his video has been watched. Kim Sang Kyun believed he can win this trial.

However, not with Ma Yi Deum. Shortly after the trial seemed to make the perpetrator win, she smiled. She has first moved the video files on a tablet PC to a flash disk.

Ma Yi Deum submitted the video as proof, “I am a prosecutor. Until now, I’ve handled a number of cases. I always wonder how to explain that the offender is guilty. I do not think about the injured victims. Now I became a victim and felt myself how horrible to stand here. I think of myself and the victims in the past and will reflect on myself”, she said.

With the sacrifice of Ma Yi Deum, Kim Sang Kyun was found guilty. But it still left a trauma for Ma Yi Deum. Ma Yi Deum worried about the hidden camera ever installed at her home, Yeo Jin Wook drove her home. At night, Ma Yi Deum cried for missing her mother.

The psychological state of Ma Yi Deum in episode 4 was very complicated. She suffered in a situation of being a victim. Ma Yi Deum iss also still traumatized from the hidden camera in her hoouse.

But the most crucial moment is when Ma Yi Deum was able to trap the perpetrator with her smile. The reason why ‘Witch’s Court’ is favored by the viewers because slowly Ma Yi Deum grew into someone who is willing to fight the evils in society.