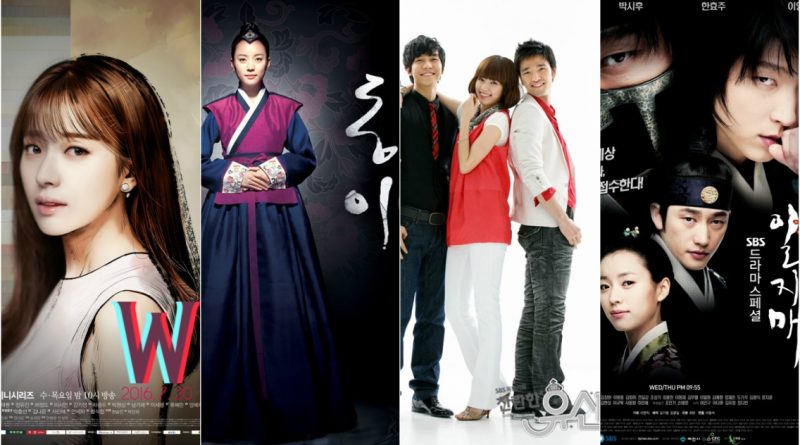 In addition to Han Hyo Joo, other cast members are Lee Jong Suk, Jung Eugene, Lee Tae Hwan, and Kim Eui Sung. The father of cardiothoracic surgeon Oh Yeon Joo (Han Hyo Joo) is mysteriously missing while writing the last chapter of his ‘W’ webtoon. Yeon Joo goes to her office and is surprised to see Kang Chul’s dying scene (Lee Jong Suk), the main character W, on his father’s computer. While reading a note left by his father, a hand from the monitor pulled him in and he found herself on the rooftop beside a man who was bleeding. She manages to save him and realizes that the person she saved is Kang Chul. Yeon Joo then discovers that she can only leave the webtoon based on Kang Chul’s feeling change. When that happens, the word ‘to resume’ will appear and she will teleport back to the real world.

The story background is in the reign of King Sukjong (King of the 19th) who ruled the Joseon Dynasty (played by Ji Jin Hee). The story focuses on Choi Dong Yi (played by Han Hyo Joo, Kim Yoo Jung’s Little Dong Yi), a music bureau waiter whose job is to help music bureaus and other heavy duties at the palace (musuri) which then earn the trust of Queen Inhyeon (played by Park Ha Sun ). She was also favored by the king and touched by the prayer she conveyed for the health of the queen at the time of chaos caused by another concubine, Jang Hui-bin (played by Lee So Yeon). Dong Yi then becomes a mistress with the rank of Suk-Bin and gave birth to the son who later became the 21st king of Joseon, Yeongjo.

Ko Eun Seong (Han Hyo Joo) lost her mother at the age of 11. Her father remarried at the age of 16 to Baek Seong Hee (Kim Mi Sook), whom Eun Seong feels does not love her. She quickly felt disappointed with her new family. The tragedy strikes Eun Seong again when her father suddenly passes away. Then, by accident, good fortune arrives on Eun Seong’s house stairs as she inherits a great fortune, but not from his father. Meanwhile, Seon Woo Han (Lee Seung Ki) is a cocky but handsome young man. He does not know about the value of money when he was raised by his grandmother and his rich mother. One day, Woo Han’s grandmother drops a shocking news that she will give all her wealth to Ko Eun Seong.

Set in Joseon era according to the genre of “history”, while Il Ji Mae who during the day work as a member of the gang market but at night work as a good thief aka “Rob B Hood” or Robinhood. If we hear the word “Robinhood” of course we immediately remember the comic/film from England about the figure of a good-minded archery robber, who stole/robbed the treasure of the nobility of corruption then give the loot/robbery to the common people who need it. In this drama, Han Hyo Joo plays Eun Chae and actor Lee Joon Ki acts as Il Ji Mae and Park Si Hoo who plays Si Hoo who seeks to capture Il Ji Mae.

June 14, 2018 Ria Comments Off on 4 Young Actor Who Can Be Seen In Today’s Box Office
Rank&Talk STAR

April 23, 2017 Tri Comments Off on Actresses Who Show Their Skill in Real Estate Business
MUSIC VIDEO