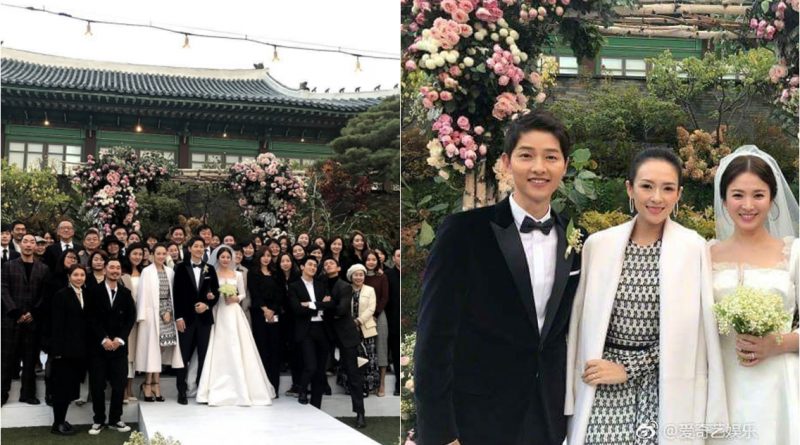 In the midst of Song-Song Couple’s private wedding issue in China, Zhang Ziyi, who also attended the wedding in white dress, is likely to be involved in the incident.

On the 1st, local Taiwanese media such as ET Today suspect Sui Wei (碎 樂, Bitmusic) media who tried to film the wedding of Song Joong Ki and Song Hye Kyo using drones, is reported to be unrelated to Zhang Ziyi. The media leads to Zhang Ziyi’s husband who is a legal representative of Sui Wei, and said Zhang Ziyi is a spy. Zhang Ziyi’s husband, singer Wang Feng, was involved in an app development for the media and is known to release the song through the app.

In addition, Zhang Ziyi is the only Chinese celebrity to attend the Song-Song Couple wedding. They rejected all media, Song-Song Couple’s wedding was held with tight security, supervised and suspected no relevance with live broadcasts in Chinese media. Song-Song Couple’s wedding has drawn considerable attention in China, and is reported  to have received an offer of 15 million won for its live broadcast of the wedding from the Chinese website portal. Zhang Ziyi is the most prominent figure in the matter, she revealed, “Wang Feng is only involved in music applications” and stated that the accusations against her are not true.

Zhang Ziyi wore a white dress standing next to Song Joong Ki on a group photo and became controversial. In her weibon, Zhang Zi Yi uploaded photos not released by Korean media such as Song-Song Couple entering the aisle while holding hands, photos of Zhang Ziyi with the groom, and the back of Song Joong Ki and Song Hye Kyo. That day, she became the number 1 search in China and her video has been watched 90 million times. After the wedding, Zhang Ziyi’s video dancing with Yoo Ah In also became the topic of conversation.