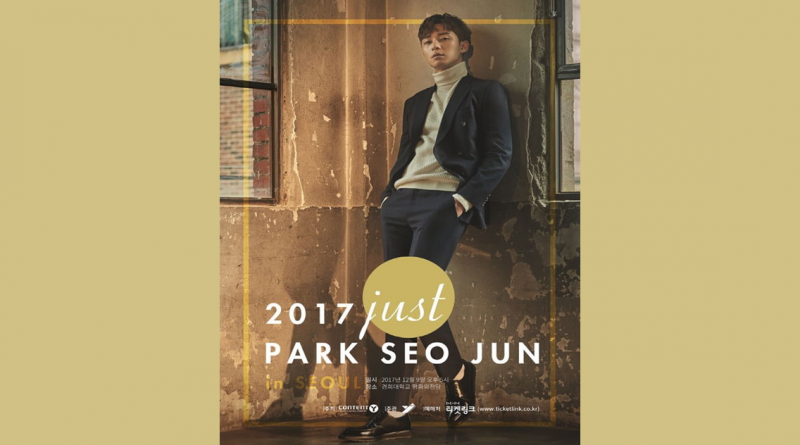 The agency of Park Seo Joon Content Y stated, “The ticket sales for Park Seo Joon’s fan meeting ‘2017 Just SEO JUN in SEOUL’ held at the Kyunghee University Peace Hall on December 9th has started on November 10th at 9 pm. In just three minutes after the ticket booking site was opened, the tickets have been sold out and fans have been asking for the day’s addition in haste waiting for our response.”

His first fan meeting event was held in December 2015, Park Seo Joon’s fanmeeting tickets were sold out immediately after ticket sales opened and showed remarkable results so fans were asking for more days for the event. After a solo fanmeeting event in December last year that sold out in just 5 minutes, this time the ticket sales has become the fastest selling record he achieved to date.

Park Seo Joon has occupied a strong position as a trusted young actor through the drama ‘Hwarang’, ‘Fight for My Way’, and the movie ‘Midnight Runners’. The popularity of Park Seo Joon caused the demand for tickets increase.

Moreover, this fanmeeting event will be the closing of this year’s Asian tour, after starting in September in Hong Kong, continuing to Japan, Taiwan and Singapore. Park Seo Joon is preparing for a fanmeeting event amidst his busy schedule just to meet his fans.

The agency of Park Seo Joon Content Y added, “Thank you for the enthusiasm of the fans for three years in a row. This fanmeeting event will be an event to share stories with fans. Park Seo Joon has prepared very well, so please look forward to this event.”