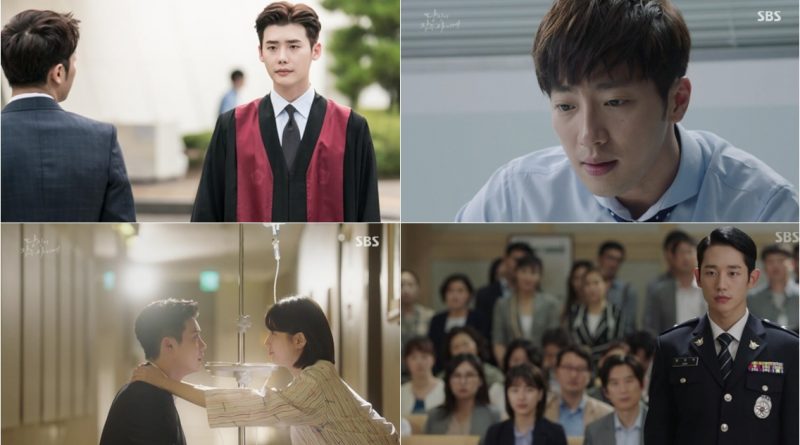 DRAMA
November 17, 2017 Ria K-DRAMA, While You Were Sleeping

Before reaching a happy ending, Lee Jong Suk and Bae Suzy must experience a crisis. During this time, Lee Sang Yeob has become the enemy for all his actions are distorted. In order for Sang Yeob to feel the punishment for his actions, they need to testify in court. However, the color of the umbrella which is an important evidence of the case did not match. How their ending will end?

On the 15th of Wednesday-Thursday drama SBS ‘While You Were Sleeping’ episodes 29 and 30, Jae Chan (Lee Jong Suk) rescued Hong Joo who was almost dead. Lee Yoo Bum (Lee Sang Yeob) has actually manipulated a serial murder case that earned him an award in the past. “I was not caught because you’ve manipulated the proof, this time please help me again”, said the real culprit.

Yoo Bum felt confused. He also contacted Hong Joo who said she knew that Yoo Bum had manipulated the evidence. The perpetrator took Hong Joo to the roof and injected her with a needle that could cause death. Yoo Bum also claimed to kill the perpetrators on the roof for self-defense.

Woo Tak (Jung Hae In) and Jae Chan knew ahead of Hong Joo’s death and picked her up, Jae Chan did a CPR for Hong Joo. Yoo Bum was restless that Hong Joo is not dead yet. Hong Joo who awoke from a coma made a different statement to Yoo Bum.

Yoo Bum was charged with an attempted murder of Hong Joo and the perpetrator. That day, Woo Tak dreamed about him confessing that he is colour blind and destroying the trial.

On the day of the trial, Choi Dam Dong (Kim Won Hae) first became a witness from Hong Joo, but Hong Joo’s testimony was considered uncertain because she was under the influence of drugs. Finally, the last important witness came. “You can tell if you’re colour blind. But you have to quit being a police”, Hong Joo said to Woo Tak. “But if I give up, we cannot catch Lee Yoo Bum. I will still testify”, Woo Tak said bravely.

August 3, 2017 Tirta Comments Off on ‘While Your Were Sleeping’ Releases Pictures of Lee Jong Suk and Suzy on Set
MUSIC VIDEO