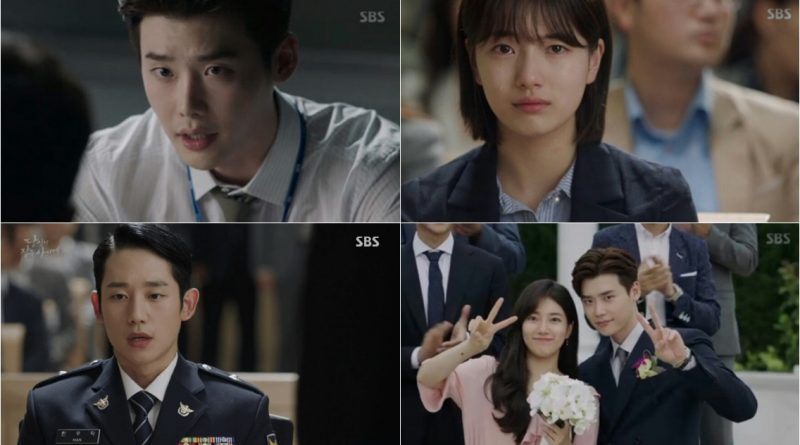 DRAMA
November 20, 2017 Ria K-DRAMA, While You Were Sleeping

Actors starring in ‘While You Were Sleeping’ get a lot of praise with a beautiful ending. Lee Jong Suk, Bae Suzy, and Jung Hae In’s acting skills are recognized, and they ended the drama well.

On the 16th of Wednesday-Thursday drama SBS ‘While You Were Sleeping’ episodes 31 and 32, depicted Lee Yoo Bum (Lee Sang Yeob) who accidentally knocked Choi Dam Dong (Kim Won Hae) to death when he felt cornered. Because giving testimony and revealing his secret, Han Woo Tak (Jung Hae In) had to resign from the police.

The sadness is over. Lee Yoo Bum confessed all his actions and was sentenced to life imprisonment. With the help of Nam Hong Joo (Bae Suzy), Han Woo Tak started studying law. Lee Ji Kwang and Son Woo Joo’s secret relationship ended up in the aisle. Nam Hong Joo got a flower bucket and then married Jung Jae Chan (Lee Jong Suk). The drama ended happily.

‘While You Were Sleeping’ is a visual-based drama in the future. Each episode always shows a new case, Suzy, Lee Jong Suk, and Jung Hae In trying to prevent their nightmares making the story full of tension. The script, production, and acting of the actor receive a lot of praises.

Lee Jong Suk developed his acting skill through the drama ‘I Hear Your Voice’, Pinnochio ‘, and’ W ‘. ‘While You Were Sleeping’ also proves his talent in acting. So it is with his partner, Bae Suzy. She is loved as ‘National’s First Love’. Through this work she has grown up as an actress. Her appearance that feels like a real reporter receives praise from the viewers.

Jung Hae In also managed to rise his name thanks to ‘While You Were Sleeping’. Unlike Lee Jong Suk and Bae Suzy who are already famous, in this drama Jung Hae In gains popularity. His handsome face and acting talents have attracted sympathy.