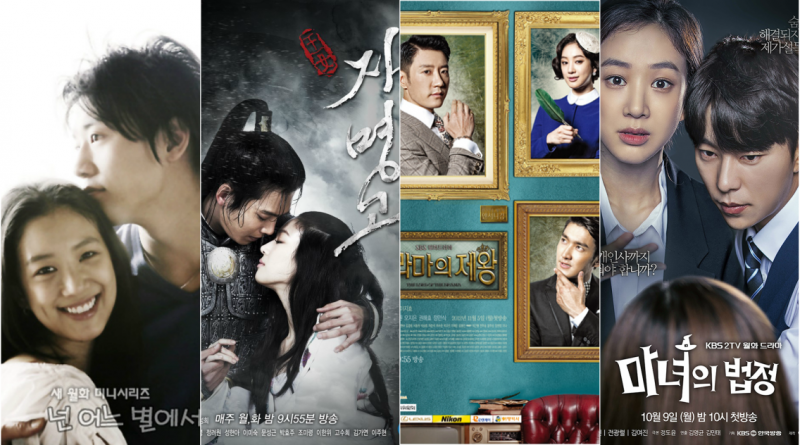 Jung Ryeo Won (born January 21, 1981) is a Korean-Australian actress. The second child of three siblings, Jung Ryeo Won was born in Seoul but immigrated to Brisbane, Australia in 1991 with her family. She suffered discrimination in elementary school, which made her determined to be fluent in English. In junior high school, she has adapted to the Australian way of life. After graduating from MacGregor State College, she entered Griffith University, majoring in international business. She started her career as a singer in Chakra and first became famous through the hit TV series My Name Is Kim Sam Soon. She is also known for her role in Two Faces of My Girlfriend, Castaway on the Moon, and History of a Salaryman.

The drama Witch’s Court tells the story of a woman who works as a prosecutor and is so money oriented. She never hesitated to use her power as a prosecutor to do every thin. No exception in making oaths and false evidence in court for the sake of winning every case handled by her. Until one day, she had to deal with cases of sexual crimes that are so difficult to win by her. Ma Yi Deum (Jung Ryeo Won), has worked as a prosecutor for more than seven years. In contrast to other female prosecutors, she likes to dramatize things. Other stars starring in the drama are Yoon Hyun Min, Jeon Kwang Ryul, Kim Yeo Jin, Jeon Ik Ryung, Choi Ri, and others.

In line with the background of Korean entertainment business, The Lord of Dramas revolves around Anthony Kim (Kim Myung Min), the brilliant CEO of a drama production company who will do anything and everything for the sake of money, fame and success. He is known to have a Midas touch because he has created a blockbuster drama and a Hallyu star. When a death at that location precipitates from its downfall by grace, Anthony tries to regain his initial status by putting the drama of The Morning of Keijo in the air. And to achieve it, he needs the help of the idealistic Lee Go Eun (Jung Ryeo Won), who aspires to be a top writer someday, and handsome but selfish actor Kang Hyun Min (Choi Siwon).

Ja Myung (Jung Ryeo Won) and Ra Hee (Park Min Young) were born at the same hour on the same day as a half sister. An oracle warns that one of two will save the Kingdom and the other will destroy it. Ja Myung survived an attempted murder of her stepmother Wang Ja Shil (Lee Mi Sook), Ra Hee’s ambitious mother. He escaped to Shandong Province, and grew into an ordinary man, becoming a top artist. When he discovers his true identity, he returns to the royal court. To avoid a new conflict of rights to the throne, Ja Myung remained in the temple as a pastor. He created the Ja-Myunggo-no system, in which a magic drum of war was placed, to defend the country from outside attack. Ja Myung and Prince Hodong (Jung Kyung Ho) of the enemy state of Goguryeo fall in love, but Hodong, as an ambitious prince, marries his half-brother JaMyung, Princess Ra Hee, to manipulate him to destroy the country’s defense system. Ra Hee, who also falls in love with Hodong, has finally chosen to undermine the country’s war drum, become a traitor – and the daughter of prophecy. Princess Ja Myung, who struggles to save her country, shoots her beloved Hodong with her sword. He almost escapes death, but he realizes their fate; they can not be together As the army approaches, he holds Ja Myung nearby and slides with the sword through both of their bodies.

Seung Hee (Kim Rae Won) is a director who loves Hae Soo (Jung Ryeo Won). Although her family is against Seung Hee, Hae Soo still wants to marry Seung Hee. When she proposes her in the car, they end up in a car accident that results in Hae Soo’s death. The drama lasted 3 years after Hae Soo died. Even after three years, Seung ee cannot forget Hae Soo and restore his life back. Determined to forget Hae Soo, Seung Hee travels to rural areas of Korea. There, after stating that he will continue his life and forget his girlfriend, he goes to the city where he sees a girl (Bok Shil) who looks like his past girlfriend. The resemblance was so shocking that he could not help staring at her and finally following her. They end up spending several days together but after parting, finally meet again when Bok Shil comes to Seoul and ends up working with Seung Hee. It is later revealed that Bok Shil is actually Hae Rim, Hae Soo’s younger sister missing in a fire. In addition, his close family friend secretly fell in love with Bok Shil’s older sister and seems also interested in Bok Shil.