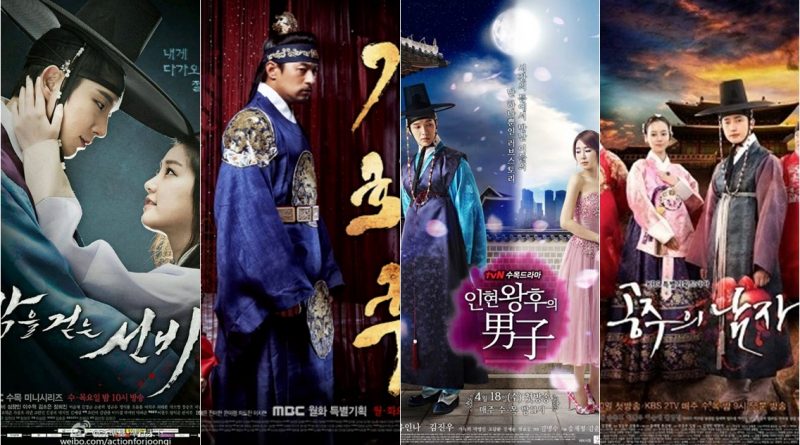 Saeguk is a drama with a historical background, most of the stories describe the actual events of history or the lives of great men in history. While infusion saeguk the story has been mixed with creative imagination, can be said to have been given a modern touch so it is more interesting for the younger audiences. Here are spme of the Fusion Sageuk genre which are quite popular.

The drama is set in the alternative Joseon dynasty where Jo Yang Sun (Lee Yoo Bi) is the daughter of a nobleman whose family lost everything when her father was trapped for treason. To meet his needs, Yang Sun began dressed as a male bookseller and met a handsome and mysterious scientist Kim Sung Yeol (Lee Joon Ki), who works in Hongmungwan. Sung Yeol is a vampire, and he is constantly haunted by the death of his long-time love of Lee Myung Hee (Kim So Eun), especially when he meets Myung Hee today, Choi Hye Ryung, the noble daughter. Meanwhile, the evil vampire, Gwi (Lee Soo Hyuk), lives in the royal palace and uses his political powers and intrigues to prevent the Crown Prince (Shim Chang Min) ascending to the throne.

Empress Ki is a tv series starring Ha Ji Won and Ji Chang Wook. The drama is aired on MBC in 2013, comprising 51 episodes. Empres Ki is a drama that lifts the story of history during the Yuan Dynasty. It tells the story of Ki Seung Nyang (Ha Ji Won), the Goryeo-born woman who was appointed to power, regardless of the limitations of the group system of the time. Then he married the Huizong emperor (Ji Chang Wook) and became queen of the Yuan Dynasty. He has the first love named Yoo Wang (Joo Jin Mo) who until now still loved him. This series depicts her love story and her political ambition split between the two countries.

Choi Hee Jin (Yoo In Na) is an actress with an ordinary career course. He auditioned historical drama as Queen In Hyun to raise his career. Hee Jin finally elected as Queen In Hyun, and he meets again with Han Dong Min (Kim Jin Woo), who is none other than his ex-girlfriend who is nosy. While 300 years ago in the Joseon era, a court scholar Kim Boong Do (Ji Hyun Woo) fought to restore the throne of Queen In Hyun (the original). His efforts resulted in his life threatened. While Boong Do will be killed, he disappears thanks to the talisman he earns. Boong Do was ‘stranded’ in Seoul 300 years later since the Joseon era, and he meets with Hee Jin. Approximately already guessed yes the next story how Finally they like each other, but there are obstacles. Boong Do is actually safe in modern times because there are no killers chasing him, but on the other hand he is also worried about the fate of Queen In Hyun. In fact he also intends to change the history and fate of his life in the past. Broadly speaking, the theme of Queen In Hyun’s Man is similar to Rooftop Prince. The drama is aired on TvN, Korean cable TV which averages its 50-minute drama. Consisting of 16 episodes, the drama is strangely tense because Boong Do is being pursued constantly to death,  but there is also romance and funny elements in this drama.

The drama is based on the kingdom during the Chosun / Joseon dynasty. A girl from Prince Agung Suyang, Se Ryung (Moon Chae Won), who falls in love with the youngest son of deputy prime minister, Kim Seung Yoo (Park Si Hoo). Early meeting Se Ryung and Seung Yoo were when Se Reyung pretended to be Princess Kyung Hye. Because Princess Kyung Hye is lazy to study (so many teachers have resigned to teach Princess, Princess Kyung Hye here is described as a spoiled, but kind-hearted), Se Ryung asks for permission to replace her as a student to be taught by Seng Yoo . Princess agrees, she also intends to help her cousin a little. The reason Se Ryung wants to change position, just want to know what the prospective husband is.