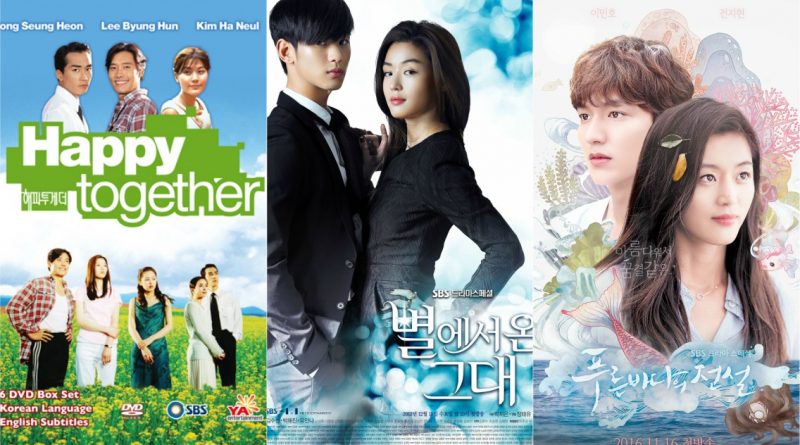 Jun Ji Hyun was born on October 30, 1981. She dreamed of becoming a stewardess when she was little and then she gave up. Jun Ji Hyun started her career as a model in 1997. She began her career as a widescreen actress through the movie ‘White Valentine’ in 1999. However, she became known through her popular movie ‘My Sasssy Girl’.  Thanks to the work her name soared in the Chinese market and make her a famous Hallyu star in China. Jun Ji Hyun debuted in a drama in 1998 with a drama titled ‘Fascinate My Heart’ and continues to be active until now. The following are popular dramas starring Jun Ji Hyun.

1. The Legend of The Blue Sea

The drama ‘The Legend of The Blue Sea’ aired on SBS television on November 16, 2016 until January 25, 2017 every Wednesday and Thursday with a total of 20 episodes. The drama writer is also the author of the drama ‘My Love From Another Star’, namely Park Ji Eun. The drama stars Lee Min Ho and Jun Ji Hyun. The drama tells of the love story of Heo Joon Jae (Lee Min Ho), a child of a wealthy businessman who became a cheat after his parents divorced, and a mermaid named Shim Cheong (Jun Ji Hyun). During the Joseon Dynasty, Shim Cheong was saved by Kim Dam Ryeong (Lee Min Ho) and they became friends. Dam Ryeong named him Se Hwa, but one day Dam Ryeong is forced to marry another girl, and hears the news Se Hwa decides to leave Dam Ryeong. After their adult meet, Se Hwa found by the villagers was brought to Dam Ryeong who at that time has become a high-ranking person in the village. In those days Dam Ryeong saved Se Hwa who was tortured by those who forced her to cry because the mermaid cries would turn into pearls. In modern times, they meet again, but Kim Dam Ryeong has been reincarnated into Heo Joon Jae. At this time, Heo Joon Jae takes care of Shim Cheong and keeps her from threats.

2. My Love From Another Star

The drama ‘My Love From Another Star’ aired on SBS television on December 18, 2013 to February 27, 2014 every Wednesday and Thursday for a total of 21 episodes. The drama stars Kim Soo Hyun, Jun Ji Hyun, Park Hae Jin, Yoo In Na, and so on. This drama is the return of Jun Ji Hyun to the television screen after 14 years. The drama is about Do Min Joon (Kim Soo Hyun), an alien who landed on earth in 1609, during the Joseon Dynasty. As he seeks to rescue a young girl named Yi Hwa who will fall into the abyss, he is left behind ufo back to his planet and trapped on earth for the next 4 centuries. As an alien, he has a remarkable sense of speed, hearing, sight, and so on. Since he can not get older, he is forced to change his identity every ten years. In modern times he worked as a professor at a university. Within three months before his return to his home planet, he meets Cheon Song Yi (Jun Ji Hyun), a famous actress who by chance is his neighbor. Slowly, he finds himself trapped in Cheon Song Yi’s chaotic and unpredictable situation, and he also discovers the fact that Song Yi is very similar to the girl he loved in Joseon’s time. Min Joon tries to distance himself from Song Yi, as he has to leave the earth, but he finds himself unable to do so.

The drama ‘Happy Together’ is a drama that aired on SBS television on June 16 to August 5, 1999 every Wednesday and Thursday for a total of 16 episodes. In addition to Jun Ji Hyun, this drama also stars Lee Byung Hun, Song Seung Heon, Kim Ha Neul, Jo Min Soo and others. This drama tells of the life of 5 brothers who split up after the tragic death of both parents. As an adult, Seo Tae Poong (Lee Byung Hun) is a professional baseball player who wants to reunite his family, and he has been looking for his brothers throughout his life. Tae Poong’s sister named Seo Chan Joo (Jo Min Soo), he supports his younger siblings Moon Joo (Kang Su Yeon) and Ji Suk (Song Seung Heon). In this drama, Jun Ji Hyun plays as Seo Yoon Joo, the youngest sister in the family. Yoon Joo has met with Tae Poong, but Tae Poong can not recognize her. Here Jun Ji Hyun is involved in a romantic story with Cha Tae Hyun, who plays Ha Shin Yeob, a man who loves Seo Yoon Joo.