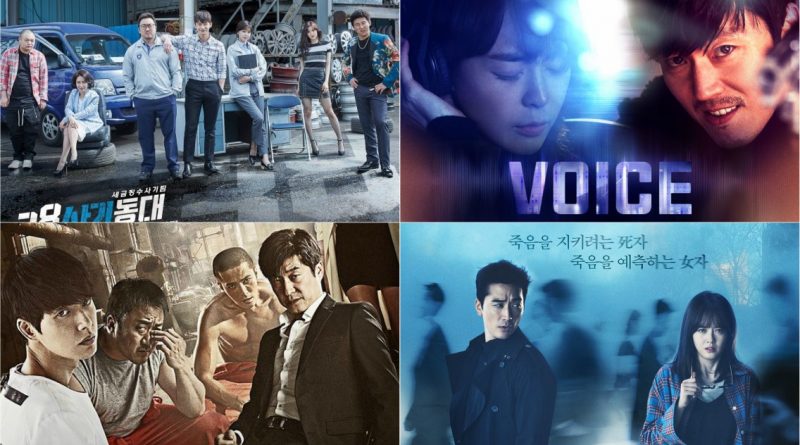 OCN, or Orion Cinema Network is one of the cable stations in South Korea owned by CJ E & M. The station has a slogan of “South Korea’s Number 1 Movie Channel”. OCN began broadcasting dramas in 2006, a drama titled ‘Someday’ starring Bae Doona, Kim Min Joon, Lee Jin Wook, and so forth. OCN is a famous television station because most of its dramas have themes of mystery, fantasy, action, thriller and crime. Just a few romantic comedy-themed dramas aired on OCN, OCN’s most recent romantic comedy drama is ‘My Secret Romance’ which airs from April to May 2017. Here are the representative dramas from OCN television stations.

The ’38 Revenue Collection Unit’ drama is an OCN drama that aired on June 17th until August 6th, 2017 every Friday and Saturday at 11pm. The drama is finished with a total of 16 episodes. The drama was written by Han Jung Hoon and directed by Kim Jung Min and Han Dong Hwa. The actor and actress who starred in this drama are Ma Dong Seok, Seo In Guk, Soo Young, Song Ok Suk, Heo Jae Ho, Ko Kyu Pil, Lee Sun Bin, and so forth. The ’38 Revenue Collection Unit’ is motivated from the ’38th Tax Division’ in the Seoul Metropolitan Government. The drama is a comedy drama that presents the complexities faced by Seoul’s national tax director who find it difficult to collect taxes from people who avoid paying huge amounts of taxes. By necessity, the director ends up working with a huge debt collector to force the fraudsters to pay their obligations. In this drama Ma Dong Seok plays Baek Sung Il who works in the tax office and Seo In Guk plays the role of Yang Jung Do, an impostor. This drama is presented to remind the many owners of companies who are not aware of the importance of paying corporate taxes for their business continuity. This drama received a positive response from the public because the story presented is different from the Korean dramas in general.

The drama ‘Black’ is a drama that airs on OCN on October 14th and still airs today every Saturday and Sunday at 10:20 pm. The drama was written by Choi Ran and directed by Kim Hong Sun. This drama has a fantasy genre, thriller, horror and also romance. The drama is scheduled to be finished with a total of 18 episodes. The actor and actress who starred in this drama are Go Ara, Song Seung Heon, Lee El, Kim Dong Joon, and so forth. This drama tells of a death god who pervades the human body and falls in love with a woman. In this drama, Song Seung Heon plays Black, who is a cowardly and cowardly detective. Mentally very weak as a detective, while on the scene of the case he will vomit when he saw the body of the victim. He then meets a woman named Kang Ha Ram (Go A Ra). Kang Ha Ram is a girl who has the ability to see the shadow of one’s death. Because of his ability he always wore sunglasses when out of the house. Ha Ram then meets with Black and they work together to prevent someone to be killed. However, it was Blacklah who changed from that person and he was eventually killed. When he had been transferred to the morgue, Black woke up after being possessed by the god of death, and from that moment he turned into a very different person from himself who was a cowardly figure.

Drama ‘Bad Guys’ is a drama that aired on OCN on October 4 to December 13, 2014. The drama is written by Han Jung Hoon and directed by Kim Jung Min. The drama aired every Saturday at 10 pm and finished with a total of 11 episodes. The drama stars Kim Sang Joong, Ma Dong Seok, Park Hae Jin, Jo Dong Hyuk, Kang Ye Won, and so on. The drama tells of Oh Goo Tak’s detective (Kim Sang Joong) who uses various means to catch criminals, and his ambiguous moral lines often result in him being suspended due to excessive treatment. Goo Tak then has plans to form a team of ‘bad guys’ to handle cases and hunt down other criminals. Due to the increasing crime in their area, even ambitious police inspector Yoo Mi Young (Kang Ye Won) signed it. Goo Tak then released three prisoners from prison to form his team, Lee Jung Moon (Park Hae Jin) is a young genius with IQ 165, and has a master’s degree in mathematics and philosophy, but he is a serial killer psychopath, then there Park Woong Cheol (Ma Dong Seok), a mafia boss who reached the top of his gang in 25 days and is still in charge of the prison, the last being Jung Tae Soo (Jo Dong Hyuk) a paid worker who never made a mistake but one day he surrendered himself to the police.

The drama ‘Voice’ is a drama that aired on OCN on January 14th to 12th March 2017. This drama is a very popular OCN drama in Korea. The drama is finished with a total of 16 episodes and 2 additional special episodes. The drama stars Jang Hyuk, Lee Ha Na, Baek Sung Hyun, Yesung, Son Eun Seo, and so on. In this drama Jang Hyuk plays the role of Moo Jin Hyuk, a crazy detective who is full of guilt for his wife who was killed while he was at work. Kang Kwon Joo (Lee Ha Na) is a tough female policeman and endowed with perfect hearing ability. He worked at the call center when a sadistic murder case happened, and he was in the process of investigating the case of his murdered father. Three years later, Moo Jin Hyuk and Kang Kwon Joo formed a team called ‘Golden Time Team’ and worked together to solve the case, as well as chasing serial killers who claimed the lives of their loved ones. In the midst of its broadcast, the drama got a complaint from the audience because of its extreme violence, which resulted in them getting a warning. After that the OCN changed the audience rating originally intended for the next 15 years to 19 years and over for episodes 11.12 and 16, to make the storyline as realistic as possible.