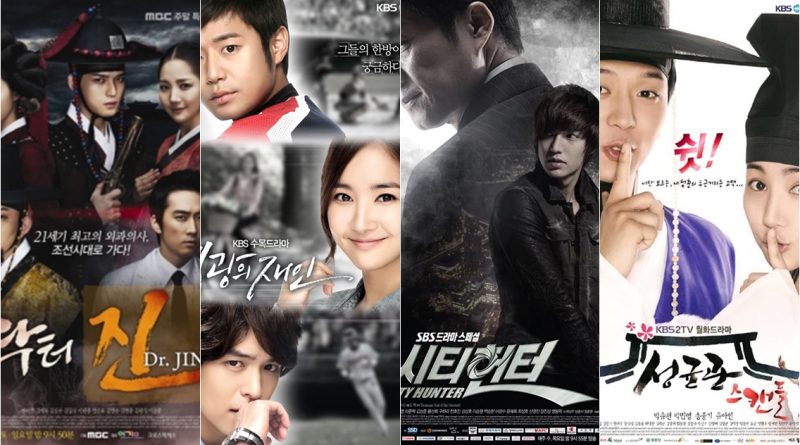 Park Min Young is a South Korean model and actress born on March 4th, 1986. She is a graduate of Dongguk University. She debuted in the entertainment industry with SK Telecom in 2005. First appeared in ‘Unstoppable High Kick!’ In 2005 and her popularity began to rise through the role of the famous gangster in ‘I Am Sam’ in 2007. Park Min Young’s breakthrough began when she starred in drama ‘Sunkyunkwan Scandal’ in 2010 with Park Yoochun, Yoo Ah In, and Song Joong Ki. In the drama, she acts as a smart woman with a lot of sense but disguised as a man to follow activities at Sungkyunkwan university. A year later, Park Min Young plays in ‘City Hunter’ with Lee Min Ho.

This drama tells the story of a neurosurgeon accidentally thrown into joseon’s time named Jin Hyuk (Song Seung Hun). Initially he operated on the brain of a patient where in the patient’s brain there was a tumor similar to the embryo. One day he caught the patient secretly taking the embryo box resulted in an interesting pull between the doctor Jin with the patient. Doctor Jin pushed and fell into the joseon era. At joseon’s time he meets Lee Ha Eung (Lee Bum Soo) who will help him adapt in an age unfamiliar to him. In Joseon’s time, Jin practiced his skills to help people in need with the equipment. In this drama, Kim Jae Joong plays Kim Kyung Tak who is the illegitimate son of Kim Byung Hee where he is the main leader of Ahn Dong Kim’s most powerful family in the joseon era. Kim Kyung Tak is the most famous military officer with excellent military ability. He has pride and high competitiveness but he falls in love with a regular woman.

The girl named Yoon Jane In (Park Min Young) works as a nurse. Yoon Jae In is actually the daughter of Yoon Il Goo, president of a well-known company. Unfortunately he was killed in a car accident. When Jane In’s mother (Eun-joo) receives news of her husband’s accident that is none other than Il Go, she immediately picks up Jane In and goes to the hospital. However, due to heavy rains, they had a car accident. Jane In lost her memory and was sent to an orphanage. Seventeen years later, In Bae’s son, Young Kwang, becomes a baseball player and his rival is Jae Myung’s son who is none other than In Woo. He is spoiled and arrogant, and when he is injured, he is taken to the same hospital. There, Young Kwang meets Jae In. Accidentally, Jae In has saved Young Kwang’s life. The drama is played by Park Min Young, Chun Jung Myung, and Lee Sang Woo.

The drama ‘City Hunter’ is a drama that creates its own syndrome in 2011. Surely the popularity of this drama thanks to its main players, namely Lee Min Ho and Park Min Young. In this drama, Lee Min Ho plays Lee Yun Seong and Park Min Young plays the role of Kim Na Na. Not only Lee Min Ho and Park Min Young starred in this drama, but handsome actor Lee Joon Hyuk, beautiful actress Hwang Sun Hee, Goo Ha Ra, Lee Kwang Soo, and others also appeared in the drama. ‘City Hunter’ tells about Lee Yoon Sung (Lee Min Ho) who is very talented. Yoon Sung himself is ambitious for a vengeance against five political people who have caused his father to die when Yoon Sung was a child. Yoon Sung also works at Blue Hose and becomes an IT expert. While working there he met a woman named Kim Na na (Park Min Young) who also joined in his revenge because they both have the same goal.

Sungkyungkwan is a university over 500 years old who still existstoday. 4 handsome young men study in Sungkyunkwan and tell their romance and friendship stories in the setting of the Joseon Dynasty. Kyun Yun Hee (Park Min Young) is a smart and independent woman. Since her father died, she had to work hard to support her family. In those days, women were not allowed to go to college while Yun Hee had a strong desire to learn. Finally she disguises as a man then meets Lee Seon Joon (Yoochun), an arrogant handsome man. Through this drama we can see the life of Korean students in the Joseon Dynasty era.

May 31, 2017 Tirta Comments Off on Interesting Stories Behind Korean and Hollywood Movie Castings
MOVIE VIDEO