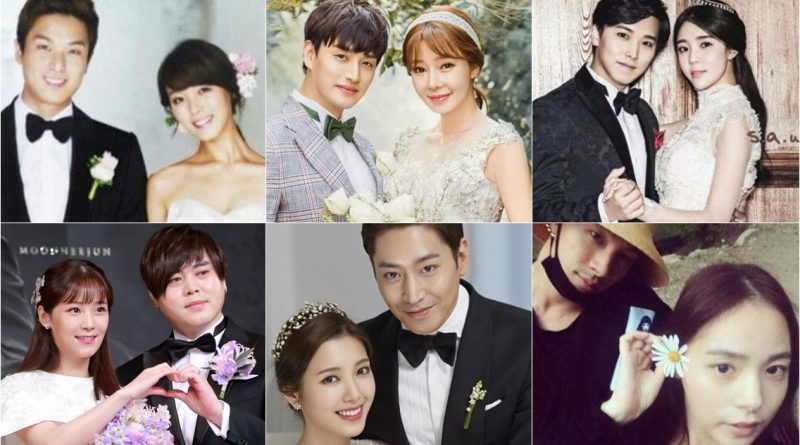 Along with the announcement of Bigbang’s Taeyang and Min Hyo Rin’s wedding, other stars who also held weddings while still active as idols have attracted attention.

Wonder Girl’s Sunye is the first artist to announce her marriage as a member of the idol group. This becomes a big topic, as the first group idol member announced marriage. In January 2013, Sunye held a wedding with her boyfriend James Park, a Korean-Canadian man. After that, she quit the entertainment industry and focus on taking care of her two daughters.

In June 2014 Eli Kim from U-Kiss announced his marriage to Ji Yeon Soo, who is 11 years older than him. Both starred in KBS2 ‘Mr. House Husband ‘and shows their daily life.

In December 2014, Super Junior’s Sungmin married a musical actress named Kim Sa Eun and surprised fans. As the only married member of Super Junior, he married before entering the military and became the spotlight.

In February of this year, Moon Hee Joon from H.O.T and Soyul Crayon Pop also ended their dating status and marched toward the marriage stage. Both caught the attention of fans as a member of idol groups. They hide the news of pregnancy, 3 months after marriage Soyul gave birth to her first daughter.

Eric who is the leader Shinhwa married in July with Na Hye Mi. Both admitted dating relationship after 3 years, after dating for 5 years, finally they both got married. Eric was the first member in Shinhwa who got married, “We will live together and build our own homes and happiness,” he said.

Lastly there is Taeyang Bigbang and Min Hyo Rin announcing their marriage news after 3 years of dating. Both are rumored to be holding a wedding in February next year.

May 17, 2018 Ria Comments Off on 3 K-Drama with A Theme of Time-Traveling
Rank&Talk STAR