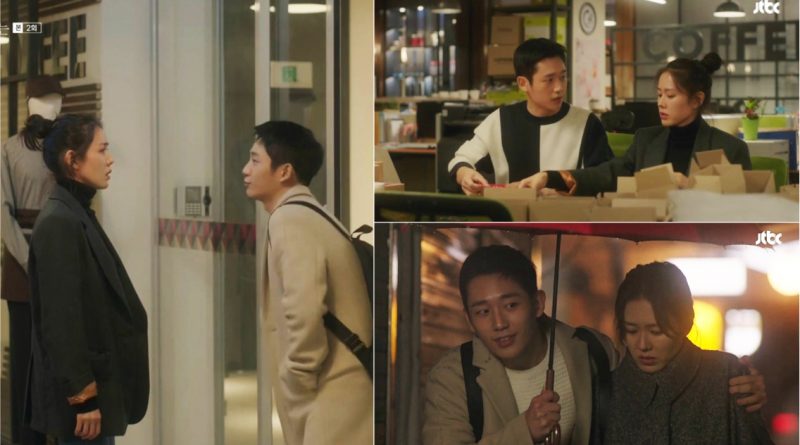 Jung Hae In played the role of Seo Jun Hee in the JTBC newest drama ‘Pretty Noona Who Buys Me Food’ and he showed an image of a little brother who is very mischievous and playful that always lift up Yoon Jin Ah’s mood. Because of that, many people are waiting for this drama ever since its first broadcast.

He saw Yoon Jin Ah fell asleep, dancing alone and he also walked with her under the same umbrella when it was raining, the smile on his face seems to never fade. Jun Hee who is always being straightforward and honest in front of Jin Ah gained a lot of attention. Jin Ah and Jun Hee have known each other for a long time and have a lot of memories and jokes to tell on but the stare and the smile on Jun Hee’s face showed that he has a special feelings towards Jin Ah.

Jin Ah was confused and feeling a bit down after knowing that Jun Hee went on a lunch with Kang Se Young, she said, “I guess all men likes pretty things?” she asked and then Jun Hee replied with “of course” but then Jun Hee told her, “You are prettier than her” and that made Jin Ah stopped drinking and staring at him. The awkwardness started to fill the air in between the two after the drunken truth came out from Jun Hee. Jun Hee later said, “Unfortunately, you’re still the best” he said with a different expression from the usual that made the iar felt strangely intense.

The savior of Son Ye Jin

Jun Hee helped Son Ye Jin by pretending to be her boyfriend when she was intimidated by her ex boyfriend, Lee Kyu Min. in front of her office colleagues, he embraced Son Jin Ah gracefuly. When Kyu Min was invited by Jin Ah’s parents, he went to Jin Ah’s house and met Jun Hee in her house. The help of Jun Hee is once again needed. Kyu Min who thought that they are living together was very livid and pulled Jin Ah’s wrist before he started to shout at her with a loud voice. Jun Hee appeared and said, “Let her go” in a very tough way. This turned him into the savior of Jin Ah.

This drama sucessfuly gives off a different sense In South Korea and has gained a lot of attention since its first episode. The reason why this drama can be so successful is that the amazing performances of each characters when they reveal their inner feelings. This drama also gained a lot of support through its perfect script and its perfect characters. Jung Hae In who played the role of Jun Hee is expected to gained viewers attention more in the future episodes. Drama ‘Pretty noona Who Buys Me Food’ airs every Friday and Saturday on 11pm (GMT+9).