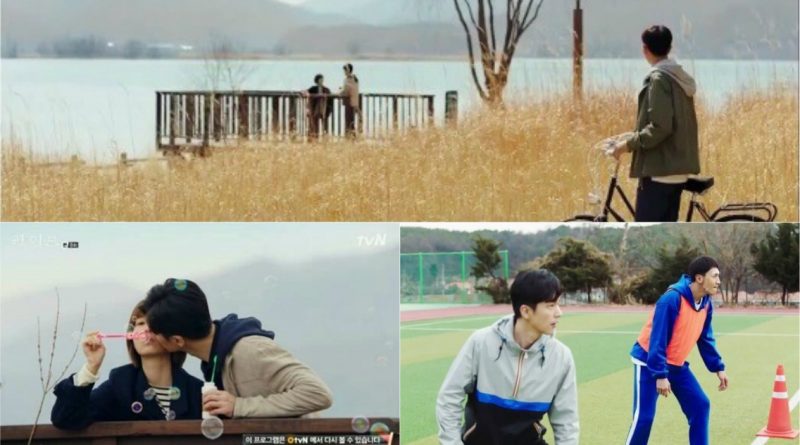 On the 8th episode of tvN’S drama ‘Live’ that aired on 4th of april, Lee Kwang Soo gave laughter and warmth to the viewrs. Meanwhile he kept his eyes on Han Jung Oh, he slowly showed his feelings straightforwardly to Han Jung Oh.

On the same day, the team of Yeongsan and Hongil security earth centre left their office for a trip. Choi Myung Ho (Shin Dong Wook) met Han Jung Oh and the later he entered the running competition where Sang Soo ended up entering the competition.

When it’s his turn to rain, Sang Soo said to Han Jong Oh “Jong Oh! Look at me! I will win!”. Unfortunately Myung Ho successfully defeated him and Jung Oh went to him to hug him. Even in the next match, a volleyball, Sang Soo keep losing and made the viewers laugh.

By the end of the day, Sang Soo saw myung Ho with Jung Oh outside the training camp. Then he saw the two of the kissed. The two of them looked very happy as they glance at each other meanwhile Sang Soo watch them from afar, showing his lonely back to the viewers that touched the viewers heart.

On the 7th episode, Lee Kwang Soo successfully made viewers laugh with the scenes where he admitted that he wanted to date Jung Oh and said “I will date you”. He also wearing his character uniform perfectly and Yeom Sang Soo showed a tense character but also honest, soft and warm-hearted.