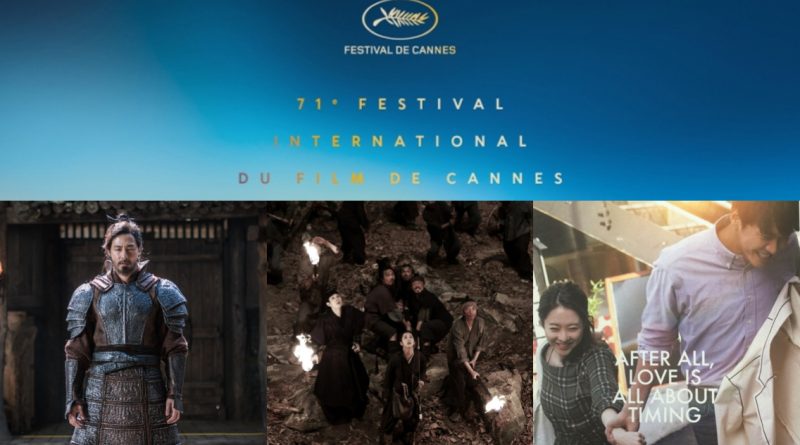 The 71st Cannes Film Festival will be held in the southern France and that is none other than Cannes itself a lot of Korean Movies are exclusively being reviewed and premiered there.

As one of film market, Cannes Film Festival this year will be supported by a few Korean film distributors who participated this year such as CJ Entertainment, Showbox,, Finecut, Content Panda and others.

The movie ‘Beautiful Days’ was distributed by Content Panda and has been attracting attention through the return of Lee Na Young for the first time after her 6th years long absence.

‘Beautiful Days’ was adapted from the real story of a north Korean defector who was separated from her son for 16th years since she fleed to the south and it turned out that her son hates her. This movie describes the chaos and the wounds that separated the two nations Korea.

A movie entitled ‘Monstrum’ was distributed by Finecut and told a story of a sea monster that appeared all sudden and threatened the life of the king and his people with the set of Joseon Dinasty period. This line up for this movie started from Kim Myung Min, Hye Ri to Choi Woo Sik.

‘Ansi Fortress’ is a newst movie from the production house NEW and was reported that this ‘Ansi Fortress’ movie has getting hot feedbacks and responds after holding a promotional event in Cannes recently.

NEW also released the picture of Jo In Sung who we have never seen before. Jo In Sung looked completely charismatic as the admiral with the heavily armored body. He will play the role of admiral in this drama along with another stars like Nam Joo Hyuk, Bae Sung Woo and AOA Seol Hyun.

The movie ‘Your Wedding’ starred Park Bo Young and kim Young Kwang was distributed by Opus Pictures and has given off the light and refreshing energy through one poster. In the released poster that has been put up in the Cannes film market, Kim Young Kwang was holding Park Bo Young hands as he dragged her to somewhere. Just like two happy children, the two of them ran with a bright smile on their face.

‘Your Wedding’ told a story of a fated love of a man named Woo Young (Kim Young Kwang) who fell in love with his first love for 10 years named Seung Hee (Park Bo Young) as they struggle to be together.

April 27, 2017 Tirta Comments Off on The Rise of ‘One Agency’ and ‘One Project’ Celebrity Couples
MUSIC VIDEO