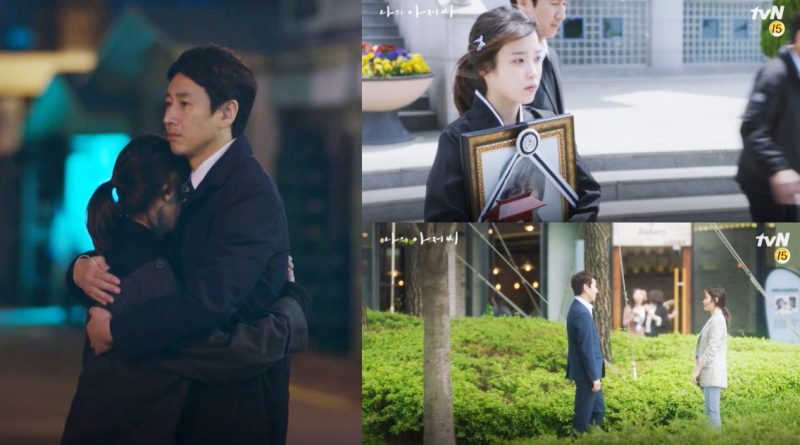 the last episode of tvN’s drama ‘My Ahjussi’ has aired yesterday on 17th of May.

In the last episode of ‘My Ahjussi’, Park Dong Hoon (Lee Sun Kyun) and Kang Yoon Hee helped Lee Ji An (Lee Ji Eun) doing the investigation in police office but then Do Jun Young keep trying to put the blame on Lee Ji An. Because Do Jun Young’s recorded file is somehow disappeared, now Lee Ji An is in disadvantages.

Meanwhile Lee Ji An heard the news about the death of her grandmother Bong Ae. Park Dong Hoon whom heard this news immediately ran and went to prepare the funeral for her. Park sang Hoon who noticed the poorly decorated funeral decided to call for a help to fix the funeral. Finally with the help of Park Dong Hoon, Park sang Hoon and Park Ki Hoon, Lee Ji An successfully done her grandmother’s funeral.

Lee Kwang Il decided to help Lee Ji An. He sent the missing file to Park Dong Hoon and at least Don Jun Young is dragged and arrested for his wrongdongs. Later, Lee Ji An got the job in Busan with the help of Jang Hee Jang. She said her farewell and thanking the people of Hyugyeong and hugged Park Dong Hoon before leaving for Busan.

Kang Yoon Hee went abroad in order to be able t conceive. Park Dong Hoon became the CEO and has opened a few major branch all around the country. Lee Ji An then returned to Seoul where the main office is located and met Park Dong Hoon without feeling awkward. The two of them greeted each other just like what they’ve promised in the past.

Now drama ‘My Ahjussi’ has ended with so much warmth. The relationship between Lee JI An and Park Dong Hoon became really warm and Bong Ae’s funeral felt so heart-warming instead of filled with sadness.

At first ‘My Ahjussi’ started off smoothly and was called work with so much possibilities. This drama then later received a lot of negative critics over the changing of the actor and also the controversies about the violence scene and the twenty years old gap relationship. But then as the story progress to end, this drama successfully took its popularity back and gained a high rating. This drama became popular and received a lot of good reviews and rating. The ability of writer Park Hae Young to write good script, the amazingly directed drama by PD Kim Won Suk and also the appearances of the actors that leave the viewers in awe are probably one of the many reasons why this drama is being highlighted.

‘My Ahjussi’ told a story of a real life drama. Maybe because it is remind us of a ordinary people who struggled to live in this cruel society that touched viewers’s heart and sense. With the happy ending, this drama has become one of the drama that viewers will always want to re-watch.