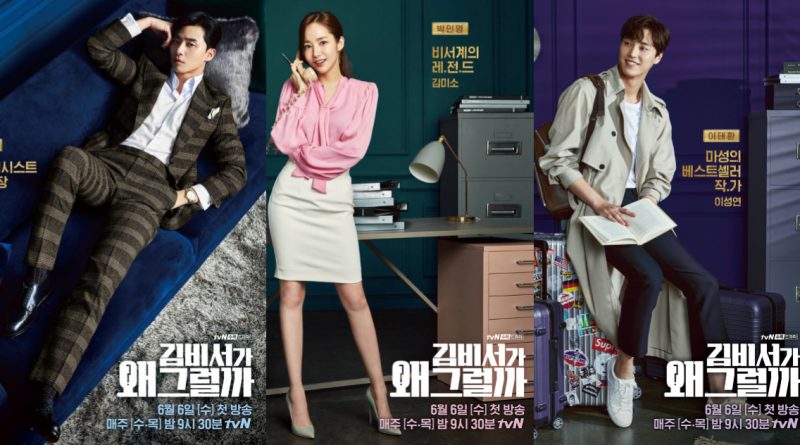 The new tvN drama ‘Why Secretary Kim’ recently just released its first character posters. Park Seo Joo, Park Min Young and Lee Tae Hwan showed off their perfect visual that made the viewers could no longer wait for this drama.

‘Why Secretary Kim’ is set to air for the first time on 6th of june and it told a story of a perfect man named Lee Young Joon, A vice chairman who has money, good look and ability yet he adores himself too much because he is a narcissist.

Meanwhile drama ‘Why Secretary Kim’ showed off the charms of each character from Park Seo Joon (Lee Young Joon), Park Min Young (Kim Mi So) to Lee Taw Hwan (Lee Sung Yeong). First, Park Seo Joon is seen laying down on the navy colored couch and he showed off his long legs along with his chic pose. But his hand was resting against his forehead as if he is in agony that made the viewers curious on what makes Lee Young Joon, a vice chairman who is a narcissist and doesn’t care about anyone but himself feeling in blue.

Park Min Young in the poster also showed off her ability on work through her perfectly arranged office that looks neat and tidy. Kim Mi So has been working for 9 years as a professional secretary that gained a lot of viewers attention. The expectation is also high on her character because she has become a professional secretary and the most trusted person of Lee Young Joon (Park Seo Joon) who is a stubborn and narcissist for nine years.