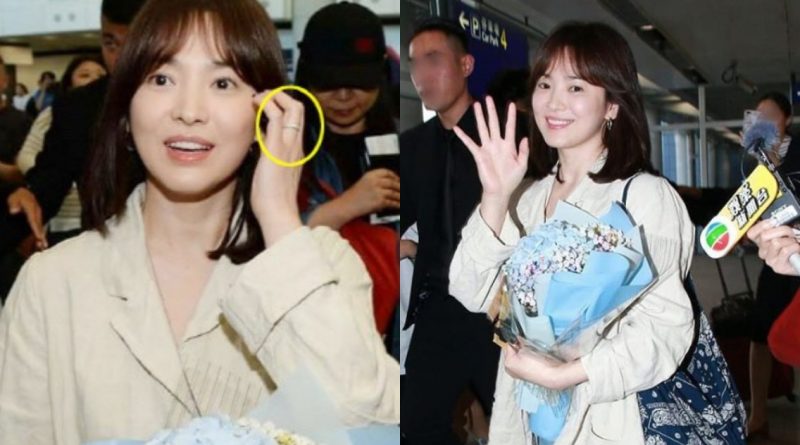 The Hallyu goddess visited Hong Kong for the first time after her marriage.

When Song Hye Kyo, the popular star from Korea visited Hong Kong for the first time since she married Song Joong Ki, she was welcomed with warm-hearted crowds.

Song Hye Kyo was seen walking in the airport with the tight security to protect her as she was greeted by the enthusiasm of her fans in Hong Kong. Song Hye Kyo was also reported to received a lot of fan letters from her fans and with a friendly gesture she waved her hand at her fans. The shining ring in her left hand which she used to wave at her fans while thanking them has become the talk of the town.

A local media wrote, “Song Hye Kyo was smiling as she left the airport with a car”.

The arrival of Song Hye Kyo is indeed a tight competition to all the local media. Those local media were outnumbered the total of her fans in the airport as they surrounded her with cameras on their hands and took a lot of pictures of her. Song Hye Kyo once again proved her popularity which is not only in China but also in Hong Kong.

The Korean Goddess Song Hye Kyo arrived In Hong Kong’s airport. Even though there is a big crowd of reporters who were seen to reporting her, Song Hye Kyo remained unbothered and kept showing her elegant beauty without losing the smile on her face.

Song Hye Kyo visited Hong Kong and successfully attracted a lot pf fans and reporter from all the local media including Taiwan. One of the media stated, “We caught Song Hye Kyo was wearing a mask and secretly left from Incheon airport to Hong Kong” thy said. Song Hye Kyo also showed her fine legs as she wore a short pans with a minimalist colored coat. Her hairstyle reminded her fans of her character in drama ‘Descendant of the sun’.

After her visit to Hong Kong, Song Hye Kyo express her grateful feelings towards her fans by accepting their letters and flowers that her fans personally gave it to her.

Meanwhile, Song Hye Kyo will attend a celebration party of some brand in Central Feder street in Hong Kong.