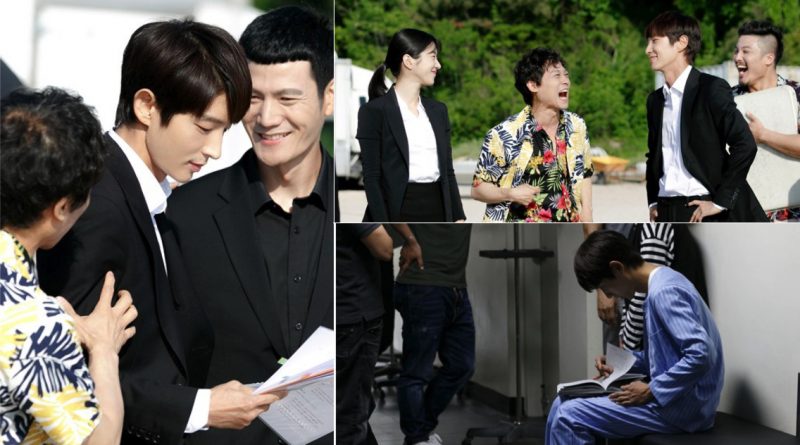 Lee Joon Gi is a violent and lawless lawyer that has been unveiled through drama ‘Lawless Lawyer’.

Lee Joon Gi who played the role of Bong Sang Pil, a character which is full of charisma in tvN drama entitled ‘Lawless Lawyer’. the family of the lawless lawfirm also gained a lot of attention as they gathered as a family and getting to know each other very well that they successfully created a friendly atmosphere.

Lee Joon Gi in 20 June said that “I can’t stop smiling. The family of lawless lawfirm felt like a real family as they protect me and made me feel the friendly atmosphere”. Meanwhile Lee Joon Gi enthusiasm can be seen through the picture of him concentrating wen reading the script in middle of the busy scenes.

‘Lawless Lawyer’ has gained a lot of attention since the beginning of its production because it’s the reunion of PD Kim Ji Min and Lee Joon Gi. This drama is completely interesting ever since the appearance of Lee Joon gi. Through his feisty action and his emotional performances in ‘Lawless Lawyer’ he successfully entertain the viewer and gained both sympathy and remorse from the viewers. It is said that Lee Joon Gi’s enthusiasm is getting heated up because of the support he received from the viewers.

The production team of this drama said, “I guess it is tiring for Lee Joon Gi but he always full of energy. We all always laughing when Lee Joon Gi is around and we will always try to keep up the good energy for the best in the shooting set” he said.