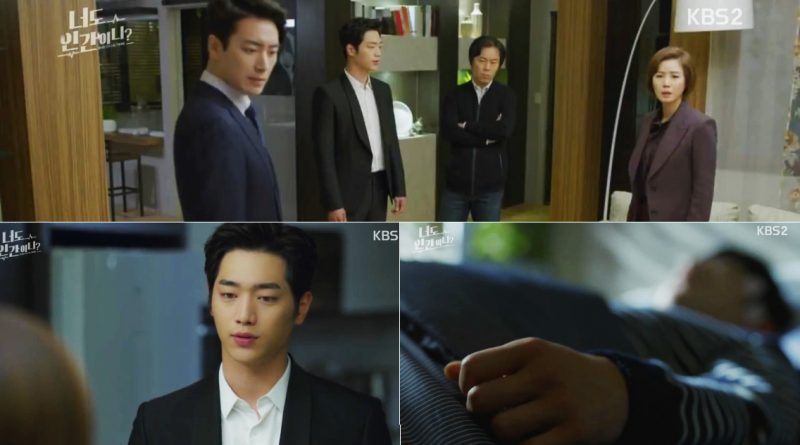 In the KBS drama ‘Are You Human Too’ the robot named Nam Shin III (Seo Kang Joon) stated that he will act like a human according to his own way.

Nam Shin III has been through a lot of new experiences in the 19th and 20th inning that aired yesterday, one of the example is that he abandoned his wedding to save Kang So Bong and made friends for the first time with her. Oh Laura who keeps getting angry towards Nam Shin III unexpected behavior said, “Why are you keep acting like this? Did I make you like this?” she complained.

As Oh Laura keeps her complain about the changes of Nam Shin III, the doctor who takes care of the human Nam Shin told her “I guess we have to stop this. There is no possibilities” he said, hinting to the recovery of Nam Shin.

Oh Laura stopped the doctor when he was about to stop the treatment machine and told him, “Don’ touch him. Even if he dies, I will take all the responsibilities so don’t touch my son” she said.

Then Oh Laura decided to do the operation to stick the kill-switch to Nam Shin III. Then later David who saw her pulling out the devices said, “why are you taking that device out? Are you going to kill him? The robot you made doesn’t become strange or crazy, it develops. Are you thinking that you’ll be fine by hurting your son? You are not a scientist, you’re just a bad mother” he said.

In the end, Oh Laura started to turned her back against Nam Shin III and Kang So Bong went to see Oh Laura to say, “Don’t kill him. If you are a mother, don’t destroy and abandon him. Please, I beg you”

April 4, 2017 Tirta Comments Off on The List of Hollywood Stars who Have Visited Korea