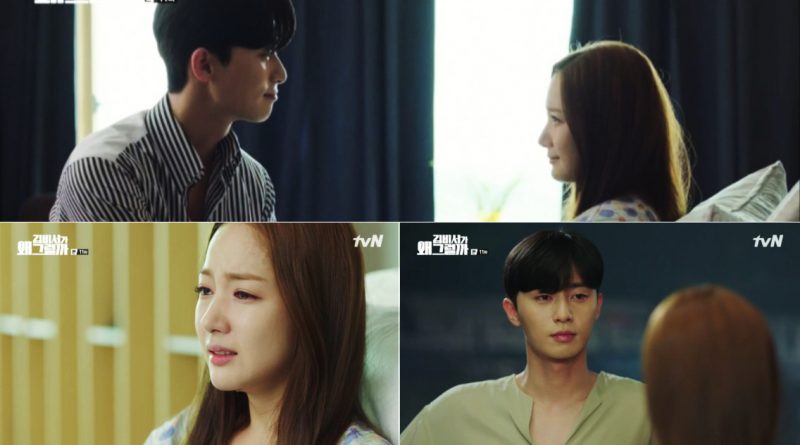 In the 11th inning of drama ‘Why Secretary Kim’ that aired in the 11th of July has topped the rank of viewers rating.

In the latest episode of drama ‘Why Secretary Kim’ that aired in tvN every Wednesday and Thursday unveiled the reason why Lee Young Joon (Park Seo Joon) hides the truth of the kidnapping from Kim Mi So (Park Min Young).

When he was holding Mi So’s hand tight while waiting for her to wake up, Lee Young Joon reminisce his first meeting with Kim Mi So 24 years ago. The background of kidnapping of young Joon and the reason why the kidnapper died has been revealed and Lee Young Joon would do anything so that the kidnapper wouldn’t find Mi So.

Young Joon looks completely reliable now, when he was a child he is also a reliable person. He will always be feeling tense whenever he saw a woman in the kidnapper age and he developed the trauma of the cable ties. When that kidnapping happened, Young Joon was always wondering if Mi So is alright.

When Mi So gained her consciousness after passing out, she asked Young Joon as to why he hide the truth that made her cried. Young Joon admitted the reason he hide the truth from Kim Mi So is that he is trying to hide his pain in the past because he doesn’t want Mi So to feel it or remember it.

Meanwhile ‘Why Secretary Kim’ once again made the viewers heart throbbed with the ending that made the viewers curios on what’s going to happen next. Young Joon was seen visiting Kim Mi So’s House at the end of the episode and said “Let’s Sleep together tonight”. The 11th inning of drama ‘Why Secretary Kim’ unveiled the dark and tragic past of Young Joon and ended up with the surprise visit from Young Joon.